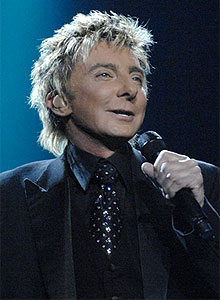 We went to see Barry Manilow last night and it was fucking incred­ible. We knew it was going to be amazing as soon as we walked through the door and were handed 'Ultimate Manilow: The Hits… And Then Some' glowsticks.

After warmup from Bobby Davro (sample 'gag': "Martina will win I'm A Celebrity — she's been eating out of the bush for years") Manno came on stage to the sound of Frankie Goes To Hollywood's '2 Tribes' mixed with Wizard Of Oz samples — we don't know what statement was being made with this — then banged out hit after hit after hit.

Some songs were only there for the time it took to sing a verse and a chorus — it was a bit like an Eminem concert in that respect — while others formed sen­sa­tional set-pieces. 'I Made It Through The Rain' was really amazing, with Barry stopping the song in the middle to tell the story of how, during his childhood growing up in Brooklyn, he would travel to Times Square with his late grand­father. Barry explained that his grand­father was the only family member who recog­nised young Barry's music­al­ity and that there was a slot machine in Times Square where you could record your voice onto vinyl. Barry played us an excerpt of one of these old record­ings — it was basically his grand­father trying to get him to sing. Barry continued his story, telling us how he wouldn't be where he is today without his grand­father and as he did so 'I Made It Through The Rain' began to swell again in the back­ground, meaning that by the time Barry got to the tri­umphant end of his story (in summary: "I am here and I am amazing") the song came crashing back in, complete with samples of his dead grandfather's encour­aging voice thrown into the mix. It was IMMENSE.

Another brilliant bit started with the video screens showing a 1978 recording of Barry per­form­ing 'Mandy' at the London Palladium. By the time the chorus rolled around 2008 Barry was on stage at the piano, duetting with his younger self on the video screens. Then it went into 'Could It Be Magic?' and everyone went bonkers.

Five people who'd be better than Graham Norton at Eurovision