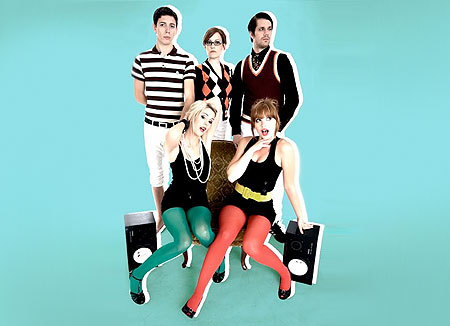 Today's Song Of The Day is unar­gu­ably brilliant* 'Mercy Mercy' by new Swedish act Le Kid. It sounds a bit like 'Can't Speak French' and Lily's 'Fuck You' and a couple of other things and is just great.

Here is a small clip, for those of you with only thirty seconds on your hands.

And here is the newly-completed video — a really enjoyable, charming sort of affair which presents the song and band in a great light. AS VIDEOS SHOULD DO THAT IS THE WHOLE POINT OF THEM.

There's another song, a high octane number titled 'Telephone', on the band's MySpace (http://www.myspace.com/lekidmusic) and we were lucky enough to hear some of the band's other songs a few weeks ago; one of them, a track called 'America', is par­tic­u­larly awesome. There's a real feel that beyond the stylised pop vision of 'Mercy Mercy' there's a massive, genre-hopping pop act waiting to explode. The songs, certainly, are no problem: three of the band are estab­lished songwriter/producer types, and there's a great writeup and mini interview on Le Kid over at the Don't Stop The Pop blog.

In summary: exciting, uncom­plic­ated but credible (if that's your bag) pop. And we haven't said the word 'amazing' yet, so: amazing.

NEW KIDS ON THE POP: A GUIDE

1. Unicorn Kid
Not actually a unicorn.

It should make them feel ashamed to be British

Priors — 'What You Need'