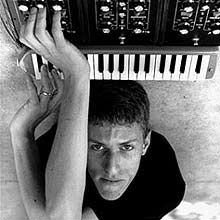 It occured to us the other week that music­maker Greg Kurstin is quite literally rocking the world of decent pop music to its very foundations.

In the last few months he has had a hand in songs including but are not limited to All Saints' 'Rock Steady', Lily Allen's 'Alfie', Stefy's 'Chelsea', something on the Jamelia album, Sophie Ellis-Bextor's 'Catch You', some of the Dragonette stuff, some Peaches bits and bobs and some other songs which are presently SECRET and CANNOT BE DISCUSSED.

Greg also makes music which is basically JAZZ so we will gloss over that, although his Bird & The Bee project is fairly likeable and the 'Fucking Boyfriend' remixes (iTunes link) are jolly listenable.

We have also found — on the internet, so it is true — a thing from last year regarding Sia:

"She is also working with Greg Kurstin on an animated music project, similar to the mul­ti­me­dia work of the band Gorillaz. The project centers around a human­it­arian superhero called the H‑Crusader."

PLUS! Following 'Catch You' there is another Greg Kurstin / Cathy Dennis co-write knocking around, called 'Sex Ain't Love'. That sounds like it would probably be fairly good.

AND! He's done a song with Mutya called 'My Love Story'.

We would like to see Greg and Brian Higgins having a fight in the carpark after school this afternoon please.

The Week In Pop 9

Duff in an elevator