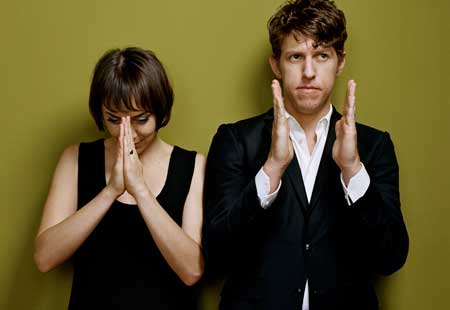 Amazing: The Bird & The Bee have got a new album coming out and it's all covers of Hall & Oates songs (except for one track which is brand new).

THE BIRD & THE BEE IN BRIEF: A 'chanteuse' called Inara George along with a chap by the name of Greg Kurstin who's basically one of the world's Top 10 pop inventors. The pair first bonded over a shared passion for jazz NO WAIT COME BACK then went on to do some songs that weren't in fact jazz and actually sound like big pop, like last year's 'Ray Guns Are Not Just The Future' album (Spotify link) and the single 'Love Letter To Japan' which could quite easily have been a fairly popular Little Boots or Lily Allen song.

ANYWAY the new album is called 'Interpreting The Masters Vol 1: A Tribute To Daryl Hall And John Oates' and it's out towards the end of March.

The first song, 'Heard It On The Radio', isn't a Hall & Oates song
at all. Instead it's a warm and bril­liantly observed 'Yesterday Once More'-style 'homage' to Tunes Of
The Past and for that reason is a very good song to kick off this
tribute album. You'll already have guessed this if you're familiar with
Greg's work but 'Interpreting The Masters…' isn't one of those terrible 'LOL remember the 80s' efforts; instead it's a pas­sion­ate fan latter to the greatest song­writ­ing duo of the 1980s whose names weren't Tennant & Lowe or Morrissey & Marr or Stock & Aitken or (GET ON WITH IT — ED)

We have listened to this album approx­im­ately three times so far and are currently on the fourth lesson. It's rating quite high in the listenableometer.

The Newsdump, Feb 10, 2010: from Boyle's cat to NME's Godlike Genius Award not going to Da Brat