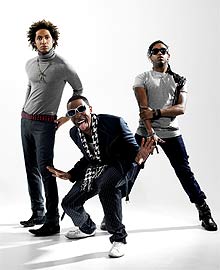 You will have read about Unklejam in our Ten For 2007 feature.

The reason they're brilliant is that they make what they called 'elec­tro­soul' music. To this end they've decided that their debut single 'Love Ya' should, er, not be anything to do with their signature sound at all.

The track's already being played by cool Radio One DJs like Trevor Nelson and Annie Mac. And also by Jo Whiley.

The video is here on MySpace or here as an old fashioned Windows Media link. Take your pick.

We will play you clips of songs you will probably be more keen on when their label let us, although they've already sent out unwa­ter­marked album samplers so keep your eyes out for illegally ripped MP3s in the usual places.

Have a look at the new All Saints video…