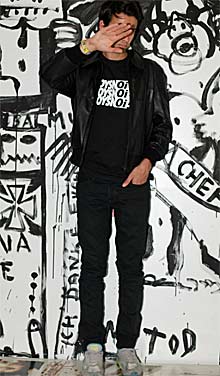 We basically know very little about this due to the fact that we are immensely uncool and spend most of our time listening to four to the floor Sophie Ellis-Bextor remixes but we think the first Boys Noize album, brought to you by Boys Noize Records, is good stuff.

If you are a fan of mental noise you will think it is amazing too.

Would you like to download a free MP3 of '&Down', the first track from the first Boys Noize album, brought to you by Boys Noize records?

Can you hear that robot voice? It's banging on all the way through the bloody album. Sometimes it's a lady robot, sometimes it's a man robot. When we put it on in the office, every time "this is a pro­mo­tional copy of the first Boys Noize album, brought to you by Boys Noize Records" came on, we said "ignore that bit". The response from the rest of the office to this hilarious joke was lukewarm to begin with and sort of went downhill from there, really.

We think the robots should leave Boys Noize and form their own band, like a cross between Daft Punk and H & Claire.

He is obviously very cool etc.

According to the press release Alex "is a man who can do it all on his own". We don't know what that means and if it's anything to do with that picture someone sent us off the internet last night we don't WANT to know.

FACTS ABOUT FOUR TO THE FLOOR SOPHIE ELLIS-BEXTOR REMIXES

This one is so com­pletely 100% amazing that we stop breathing a little bit when we hear it.

Press release embargo of the week