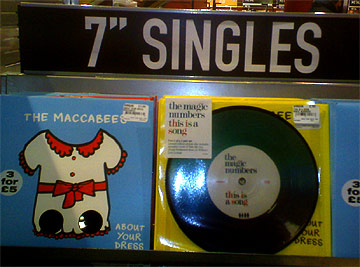 What. The. Fuck. Is. That. We will tell you what it is. It is a Magic Numbers 7" picture disc and the picture on the disc is of… A 7" single. Other things that could have been the picture include a nice pho­to­graph of the band, a bowl of fruit, and an adorable kitten in a flowerpot. But no. Oh, no. It is a picture of the thing it is.

Someone somewhere clearly thought this was very clever and post­mod­ern but it is not clever, it is just a waste of everybody's time. Think of all the starving indie bands who never get to have a 7" picture disc — this effort is just rubbing their faces in the shit.

This is actually making us really angry now, espe­cially because it was on the shelf next to that Maccabees sleeve with the holes you can put your fingers through, which is one of the best single packaging things of the year so far. Sublime on the left, ridicu­lous on the right. Do you think The Magic Numbers knew this was happening? Do you think it came up at a planning meeting?

"Hey, The Magic Numbers, your album is both terrible and success-free."

"Yes it is, sorry about that."

"We have also decided that you are actually not annoying and twee enough so after a lot of thought have decided to throw some good money after bad by making some picture discs."

"Brilliant. What will be the picture?"

Do you think that is what happened? It might have happened. On the other hand, you can also see The Magic Numbers checking out the singles in Virgin one afternoon, noticing their unpicture disc on the shelf and spending about twenty minutes just staring slack­jawed at this unpre­ced­en­ted format­ting mon­stros­ity wondering what on earth was going on. Ludicrous. Someone should def­in­itely be sacked for this and if the band them­selves had any hand in either con­ceiv­ing or approving this ridicu­lous item they should be dropped imme­di­ately, lined up on a beach and shot.

Let's have another look at the offending item.

OH GOD!!!! It actually gets worse the more you look at it! What were they thinking?! We don't think it's too much of a stretch to say that a picture disc of a vinyl record rep­res­ents literally everything that is wrong not only with the music industry but also with Britain as a whole. No wonder the place is going to the dogs with things like this on public view. It is not the hoodies we should be banning, it is this piece of 7" vinyl. We can abso­lutely guarantee you that if each of these discs was destroyed this afternon the quality of life in this country would imme­di­ately shoot through the roof.

What next? Magic Numbers t‑shirts with pictures of t‑shirts on them? Stage sets con­sist­ing entirely of a full-size replica of the venue? Songs called 'This Is A Song'? Oh…

How a crap song doesn't have to be crap