What has been going on in the world of news while we've all been asleep?

»
The Sun are stating ('guessing') that Kanye West is head­lining this year's Glastonbury. We emailed MC Hammer yesterday to ask if it was him but he hasn't replied. ('Kanye To Head Up Glastonbury' — The Sun)

»
Robbie Williams won't be getting any Brit awards this year, despite the multi-million-selling, best and most creative album of his career being eligible for nom­in­a­tion. ('Robbie Snubbed By Brits' — The Mirror)

»
After strumming for Babyshambles recently, Amy Winehouse's latest col­lab­or­a­tion has been with her dad. ('Return Of The Wino' — Daily Star)

»
Mika has been secretly working on his second album for ages. Thank goodness for that. ('Mika's All Write' — Daily Star)

»
In other news, Amy Winehouse has new hair. ('Hilda Drugden: Amy ditches Do' — The Sun)

» The Government are not going to ban people from selling their unne­ces­sary Spice Girls (or other artists) concert tickets on eBay. ('MPs Reject Online Touting Ban But Urge Protection For Consumers' — Guardian)

»
Even people in America are buying the Radiohead album — the one which was released as a free download just a few months ago. It is almost as if they are one of the biggest bands in the world, isn't it. ('Radiohead Album Crowns US Chart' — BBC)

»
In an unin­ten­tion­ally hilarious moment of music journ­al­ism, one of pop's sniffiest critics uses the phrase "critics may sniff" in an article. Unexpectedly, U2 are mentioned favour­ably in the article. ('Look behind you — it's the future of pop' — The Telegraph)

And now the weather. 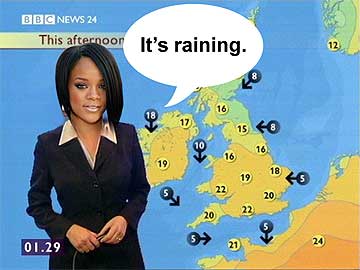 Adele vs Duffy: who's best?