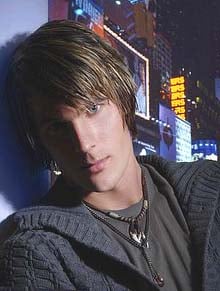 Basshunter's new single, 'Now You're Gone', is a Number One single, which means a lot of boo-hooing to mummy for little Leon Jackson.

As well as having a couple of massive hits across Europe, Swedish singer and producer Jonas Erik Altberg has also made a name for himself with naked pictures appearing all over the internet.

We spoke to him recently about both of these things…

Hello, Basshunter. Are you aware that you are going to be Number One in the UK?
I know I have knocked the boy from X Factor from Number One and I know they can be tricky to knock off the charts.

And how will you be celebrating?
I will be drinking a lot of whisky and playing 'World Of Warcraft' with my friends. I don't have much time to play computer games and hang out with my old friends drinking scotch any more, so it's the best way I could possibly celebrate my success.

Your video follows a tra­di­tional format of some nice looking women rubbing up against each other and groping one another's breasts. Are you a fan of this popular approach?
That's my style, I like women but I don't really know what happened with that video – I do think it's cool though. I don't want to be in the centre all the time so I'm happy to only be in the video for about two seconds. I started out being a DJ at small parties around my hometown so it felt good not to have too much pressure on me when it came to making the video.

Why do you never see men rubbing up against each other in pop videos?
Because women have bigger boobs! Sex sells and everyone knows it; I know that I'm a man and when I see a girl on the TV I start to think special things…

Such as: 'I must go and buy that single'?
Exactly. In my next video I'll have two girls and 80 guys and we can stand there with our tops off in our banana pants and just swing it. That would be totally super.

Speaking of 'banana pants', there are a lot of inter­est­ing pictures of you on the internet right now…
I'm sorry you had to see those. Do you want the story behind them?

That would be nice.
I'm just going to get some whisky.

So it doesn't make you feel awkward knowing that as many people have seen you having sex as have bought your single?
I don't feel awkward at all. The only thing I feel bad about is that the pictures could have done with a lot of work in Photoshop, that's all I feel awkward about. Honest. I can honestly say that I like sex – I like very much to use my penis for what I was born to do and I'm not really the shy guy. I want to show the world.

What does the future hold for Basshunter?
Maybe in five years I will be working like a normal person somewhere, I have a special plan for what I want to be doing in five years…

Thank you very much, Basshunter.

Basshunter On The Internet:

(You can google 'the rest'for yourself…)
Previous Article

The Newsdump, Jan 10 08: from Kanye in a tent to iTunes' price descent