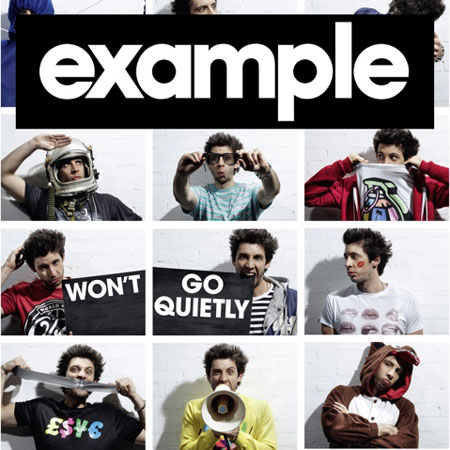 When it goes wrong, or is done for the wrong reasons, it's a com­prom­ise and an embar­rass­ment, but when it goes right it feels like the artist is putting their music there in the middle not because it feels like it should be there, but because that's where it makes most sense and sounds most brilliant. It worked when Rihanna homed in on dubstep for the bril­liantly-realised gloompop extra­vag­anza of 'Rated R' and it's worked just as well for Example, who's headed in the opposite direction with 'Won't Go Quietly'.

We first started hearing bits of 'Won't Go Quietly' last spring, and we were imme­di­ately taken with its big tunes, colourful ideas, ambitious tunes and unself­con­scious style. It's a pop overhaul that moves Example's sound on from, but still makes sense in the context of, his first album — lest we forget, this was an album that sampled Kylie and The Carpenters. Everything's tighter, more confident and better: it feels like Example just 'gets it'. It will certainly lose Example a few of his original fans but those who are on Example's wavelength, and under­stood what he was trying to do on album one, will find plenty to enjoy. For his new fans (current single 'Kickstarts' is due to hit the Top 5 this weekend) 'Won't Go Quietly' will exceed expect­a­tions. From a Popjustice point of view, if you were launching a boyband in 2010 this is the exactly the album you'd want them to make. Clearly there is no higher compliment.

Here's a sort of megamix sampler thing that's been knocked together in — we suspect — eight minutes.

What's been happening in the world of 'Monarchy'?