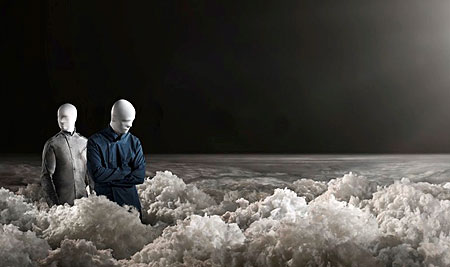 Well, as you may have noticed, they have been doing inter­views and things and people have been going 'woo just who are these mys­ter­i­ous musicians etc etc etc'. It is almost as if we didn't unveil their iden­tit­ies, with the full green light from their 'people' plus a quote from the band, IN JANUARY. Not that it really matters but it's a bit odd.

In other news, the band are broad­cast­ing a gig into space (as one does) this weekend. There are details of this exciting (and in no way purely for the benefit of publicity) concert here.

Also, there is an album. This is what it looks like. 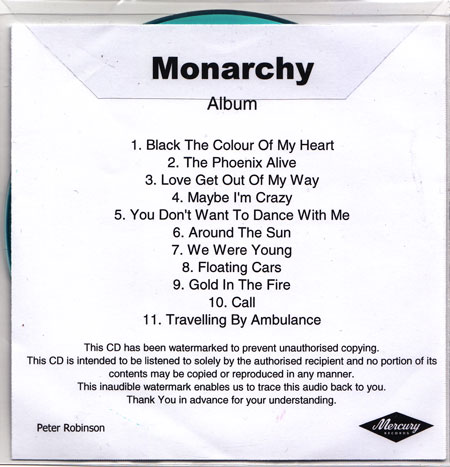 We got it a few weeks ago then left it in the car for a bit but retrieved it yesterday and started listening to it again. It's highly listen­able, if a bit 'all on one level' (but so are approx­im­ately half of all amazing albums so don't let that put you off).

Here is a clip of one of the best songs that hasn't yet been a single-slash-'buzz'-track — it's track number eight and it's called 'Floating Cars'.

Well that was pretty good wasn't it.

AND THERE'S MORE. This one is 'Maybe I'm Crazy'. You may remember this one due to the fact that it was a Milke release. It's a bit different now (but not very).

[youtube]7E9Ytgkkugs[/youtube]…and 'Black, The Colour Of My Heart' (which is on the band's MySpace), what you are probably beginning to notice is that the Monarchy album is something you should seriously consider throwing a bit of cash at when it becomes properly available at some point later this summer.
Previous Article