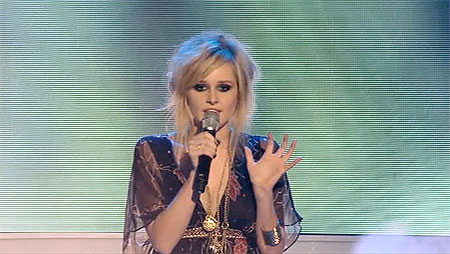 We fucking love Diana Vickers so we are very pleased to report that she has signed a deal with RCA.

We can also reveal:

» She will be recording some tunes.

» The tunes will then be released.

» You — and everybody you know — will be able to purchase these tunes so that you can listen to them on your stereo, your portable media player, or your computer. Be aware that you will also have the option to download Diana's tunes illegally — this is ILLEGAL (hence the name) and we would advise against that course of action.

Anyway unless she releases terrible records this is going to be com­pletely brilliant.

We wonder what has happened to Austin Drage? Perhaps he is 'down the gym' doing his whole 'Determined Drageface' routine, pumping up his upper body in the hope that people will like him more. One day, possibly during a demeaning public appear­ance on stage at a violent inner city nightclub, he will simply explode Mr Creosote-style, covering the audience with a shower of blood and body tissue; a sort of waterfall of X Factor faildom. (Either that or he's working on tracks and hopes to have a single out in a few months.)