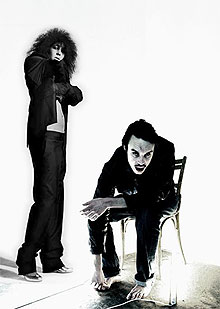 2. It features guest vocals from Titiyo (rubbishly Photoshopped into picture of Kleerup, right). Titiyo is Neneh Cherry's sister. What is she like? Very good at singing, since you ask.

3. It's the perfect follow-up to 'With Every Heartbeat' and its backing track tells you it's by the same man, but it isn't one of those total carbon copy follow up singles favoured by The World Of Dance.

4. Another thing it shares with 'With Every Heartbeat' is a con­fus­ingly unpin­point­able level of warm sonic sadness which manages, somehow, to make you want to punch someone AND ask them for a hug.

6. We have been listening to it almost non-stop for about a week.

7. The single's released in Sweden in a few weeks. We do not know when it is released in the UK. Perhaps someone should look into it.

Notes on 'Something Good '08' by Utah Saints