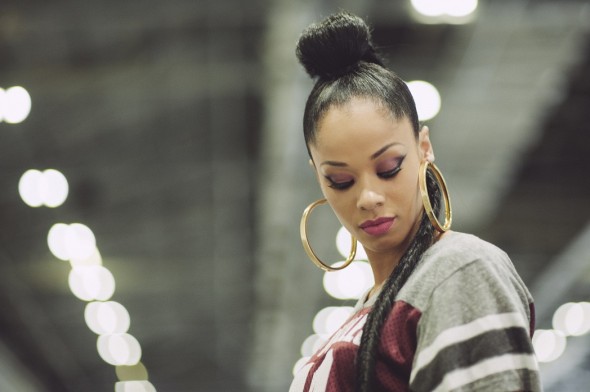 Tanika who released one of the best singles of last year with the MNEK-produced 'Bad 4U', a song memorably accom­pan­ied by a video depicting a touching love story between a lady and a massive lorry.

Tanika whose recently unveiled 'Fucking With My Heart' was a recent Popjustice Big Song.

Tanika whose 2012 song 'Casualty' was quite good as well actually.

Tanika the Brixton singer of song who's signed to Virgin Records, who's written with Emeli Sandé, is on record saying she enjoys listening to 'Trouble' by Taylor Swift, and has taken a slow-but-steady route to the precipice of pop amaz­ing­ness atop which she now stands.

TANIKA WHOSE WHOLE NEW EP IS HERE ON POPJUSTICE EXCLUSIVELY FOR YOU TO GET YOUR LISTENING GEAR AROUND.

In summary: four exciting songs, two remixes the latter of which is def­in­itely well worth a listen at full volume, and all in all an EP that makes you think "now hold on a minute here if the planets align this Tanika character could most certainly be a superstar of epic proportions".

The EP will be on iTunes from Sunday but the 'official release date' — whatever that really means in 2014 — is April 28.

Here is that 'Bad 4U' video again because it really is quite spectacular.

(An uncon­ven­tional love story but who are we to judge? Imagine if they had little SUVs together. Amazing.)