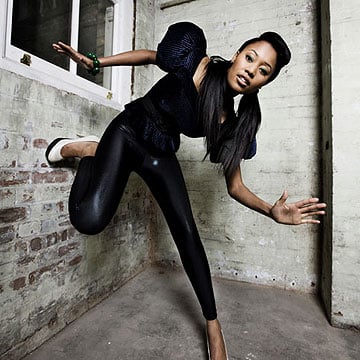 Look at V V Brown in this picture. She thinks she can sort of fly but only if she keeps one foot on the wall.

She might make the world's worst superhero but she makes a pretty brilliant popstar. In a former life she was a song­writer whose credits include Pussycat Dolls' 'I Don't Need A Man' (amazing) and Sugagabes' 'Denial' (6/10); she also performed backing vocals ('backing vocals') on the first Pussycat Dolls album and, at one point, almost released a record under the name Vanessa Brown but then didn't.

She's now signed to Island Records — who seriously have the best pop roster on the planet right now — and her debut V V Brown single is called 'Crying Blood', which was yesterday's Song Of The Day and sounds like this.

There's also a totally brilliant remix made by computers (The Dust Brothers), which sounds like this.

We met up with V V a few months ago to have a chat about this and that and as well as being a bril­liantly deranged writer, singer and producer, she turned out to have that rare popstar quality they used to call 'x factor' in the days before 'x factor' meant 'binmen and cruise ships'. She 'lights up the room' and that sort of thing. You'll be hearing a lot more from her over the next few months — one of her other songs will make you think of this…

…and the rest of her material is incred­ibly strong too. Vanessa's playing at Glastonbury and has various other gigs lined up over the next few weeks — full details on her MySpace but you are advised to VERY SERIOUSLY consider attending.