Here is a picture we took of a sign on a toilet door when we were drunk a few months ago. 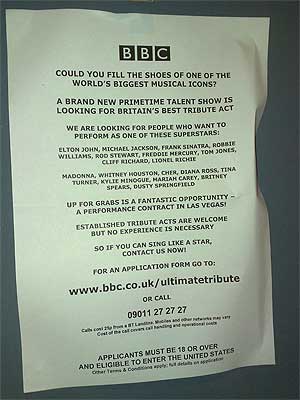 Well, the show - 'The One And Only' — aired on Saturday night and Christ on a bike the BBC have got their work cut out if they're hoping to show a worse programme on primetime tele­vi­sion this year. The prize is a three-month stint on the Legends show in Las Vegas.

Here's a clip of the Kylie segment.

There's a dis­cus­sion about the show on the Popjustice forums at the moment with comments from people who audi­tioned for the show, including Britney impres­on­ator Kimberley Dayle. Apart from raising the inter­est­ing point that tribute acts feel that this show is demeaning their work (echoing arguments made by popstars when the first reality pop shows started seven years ago), one of the other things mentioned is that, right now, "I know the Las Vegas Legends Britney quite well and she said that even
SHE can't get on that show now because Britney's gone all nuts…". :(

The Newsdump, Jan 7 08: from Gareth on ice to Courtney's advice