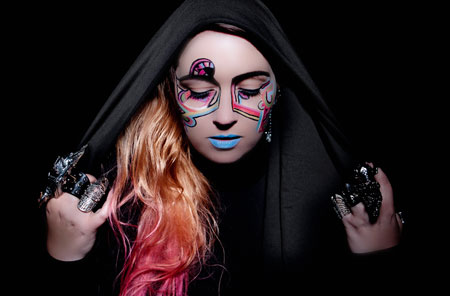 If you ever want to make yourself APOPLEPTIC WITH RAGE, have a look at what other countries get up to in the run-up to Eurovision, how many great people want to represent their country when they know their country will take their efforts seriously, and how much great music comes out of it as a result.

Today's Song Of The Day is 'You And I' by Minnie-Oh. It's one of various songs 'battling it out' tomorrow night in the second of Norway's three Melodi Grand Prix semi finals, ahead of the final on February 11.

Minnie-Oh's 'people' sent over some blurb about who she is. It makes her sound quite exciting.

"She makes electro pop with intimacy and mel­an­choly, and a flair for pop melodies that stick to memory. It creates a sound­scape that is guar­an­teed to be danced to, and honest lyrics that are easy to recognize them­selves in. The music may have ref­er­ences to artists such as Junior Boys, New Order, Yelle and Robyn, but Minnie-Oh is inspired by everything from Sufjan Stevens to Britney Spears.

With previous projects, Johansen toured in Norway, Germany and Canada and played festivals such as Norwegian Wood, Canadian Music Week, Pop Montreal and by:Larm. In 2009, she released her debut album "Champagne, Caviar and Me." as Miss Harmonica. She has shared the stage with artists like La Roux, Rye Rye & MIA, Familjen, Little Dragon, Oh No Ono, Of Montreal, Bunny Rabbit and The Whip to name a few, and con­stantly impresses with her presence and strong stage per­form­ances. These days, the song "Princess" from her debut album can be heard in the popular Canadian youth series "Debra".

She is a well-known fash­ionista in the Norwegian fashion industry and also runs her own vintage shop, Flashdance, where she col­lab­or­ates and work as a stylist for other artists and actors. This whole can also be seen in the stage shows in terms of visuals, lasers and spec­tac­u­lar outfits."

So we're looking forward to seeing her per­form­ance tomorrow night.

But — and this is the bit where you'll get really angry, par­tic­u­larly when you take into account that there was another bunch of com­par­able songs last week and there'll be another load next week — some of the other songs in tomorrow night's semi are really good too.

This sounds a bit like Frank-meets-Girls-Aloud-era-Xenomania but not as good but still worth a listen.

Isabel Ødegård
— 'I've Got You'

Hopefully we can all agree that this is the greatest song Emma Bunton never recorded.

When extended metaphors go wrong: Tommy's love is a highly con­ta­gious infection, he can't make it better. If this was 7% better it would have been a great surprise upbeat number on the recent Westlife greatest hits.

Imagine if Matt Cardle's first single had sounded like this. Imagine if his label had FORCED him to release this. In fact, even better, imagine if after all that bluster about 'writing my own stuff' and 'following my own path', THIS was what he wrote. Imagine that meeting at the label. "HEY EVERYONE YOU KNOW I'VE BEEN IN THE STUDIO FOR A MONTH WORKING ON MY ALBUM? WELL ACTUALLY I'VE ONLY DONE ONE SONG AND HERE IT IS." Amazing. "PS: I'M CHANGING MY NAME TO PLUMBO." Double amazing. (Well not amazing in any sense at all but you know what we mean.)

"My heart beats 1–2‑3, HELLO!!!!" Incredible. If Minnie-Oh comes second to anything, we'd be happy for it to be this. This might actually be better than Minnie-Oh. It's def­in­itely extremely good, in a com­pletely deranged 'this person would be quite hard work to live with' way.

This sounds a bit like a Saturdays album track. We're not sure but we think that's a good thing. It changes week to week.

If you are in Norway, please use your vote very wisely indeed. (Is it a public vote? We're presuming it is. World class music journ­al­ism at its very best here readers.)

We weren't joking about that Marcus Collins single

Lana Del Rey — 'This Is What Makes Us Girls'