We7 is a music streaming service. The service they provide is pretty good — they were behind the Rihanna widget yesterday, for example — and their catalogue isn't exhaust­ive but it manages to cover at least most bases.

Sadly, they also send out press releases like this. 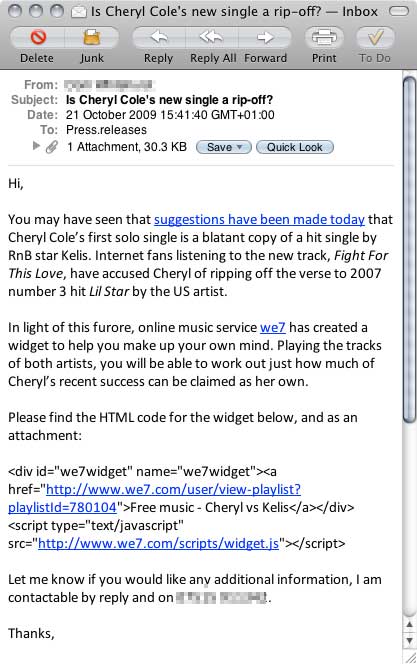 It'd be fairly oppor­tun­istic at the best of times, and what is the world of PR without a bit of oppor­tunism thrown in, but chucking out a press release only after the main­stream press have already started running stories about the sim­il­ar­ity (and by that we mean several weeks after everybody else noticed the resemb­lance, debated it then moved on) seems lazy, dis­in­ter­ested and almost cowardly to boot.

Mind you, while it might be a pretty dire ambulance-chasing PR effort it's not as if anyone could take offence at this. It's not like We7 are doing something in properly bad taste simply to promote their service.

No, for an example of that, let's have a look at an email We7 sent out over the summer. 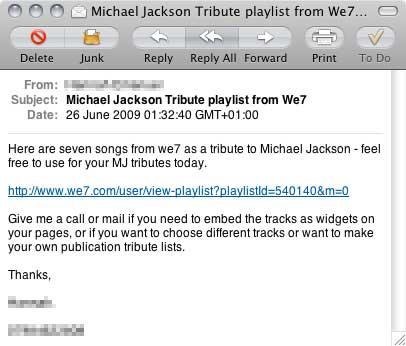 Check out the date and time that email was sent. We'd take a guess and say that Michael Jackson's body was literally not even cold when they sent that out.

Do any of you lot fancy coming to this?

Listen to bits of the new Alphabeat album