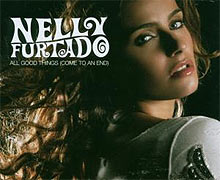 Watch an acoustic cover by A Man

Despite the lack of a video in which Nelly loses a dog — surely, in 'Maneater', the defining vidular 'motif' of 2006 — 'All Good Things' is both a BALLAD and A SONG WHICH SOUNDS LIKE 2006. Westlife, are you reading this?

It is a song about things being good and then becoming shit. ("A bit like Popjustice" — The World.)

The song is also proof that Chris Martin should stick to writing songs for other artists to perform, instead of flogging away at his own band, Coldplay. CHRIS. IT DOESN'T MATTER IF YOU'VE GOT 161,000 MYSPACE FRIENDS — YOUR BAND WON'T GET A RECORD DEAL SO JUST GIVE UP AND STICK TO WRITING FOR OTHER PEOPLE.

SINGLES: The indie vs pop debate won't go away but The Fratellis at least make a

hands-across-the-water gesture by covering a McFly b‑side, The Zutons fail to regain

might expect, Fergie's 'Fergilicious' isn't as good as its video but is better

than the Fergie-esque Gwen single, which is a sorry state of affairs, Shakira's

'Illegal' is not exactly as amazing as 'Hips Don't Lie', Lostprophets' 'Can't Catch Tomorrow' is like Panic At The Disco without any depth,

and terrible verses, and The Dykeenies' 'Waiting For Go' is great but not much fun.

ALBUMS: Take That's 'Beautiful World' only comes close to 'Patience' once or twice but comes in one of those boxes with rounded edges, Il Divo get it (unlisten­ably) right and G4

get it (also unlisten­ably) wrong, Faithless release yet another album without

'Insomnia' on it, and Incubus are still going.