As you can see, our pro­fes­sional in-house rock pho­to­grapher was on top form on Tuesday night, for Take That's Abbey Road gig. 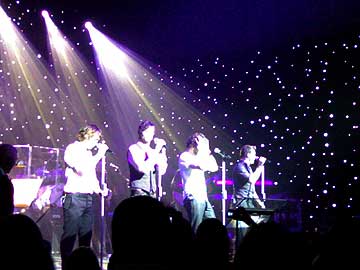 We meant to tell you about this yesterday but
. It was great. They did a mix of hits and new stuff and finished off with their Beatles medley because they were at Abbey Road DO YOU SEE. Lord Beverley Knight was there as well but she didn't do 'Relight My Fire'.

Our favourite thing about the evening was that for the last fifteen minutes of the show Jason suddenly seemed 'a little the worse for wear', to such an extent that he didn't seem entirely sure where he was.

See you if can guess which of the white blobs in the video (right) is Jason.

The gig's being broadcast tomorrow night at 8pm on Radio 2.

Stuff about a new boyband

Single Of The Week