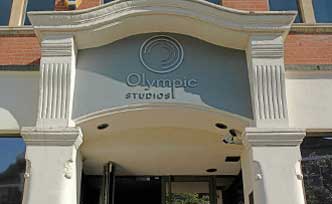 File under 'quite sad': Olympic Studios, which in the 1960s was home to people like The Rolling Stones, Dusty Springfield, Jimi Hendrix and Led Zeppelin but in recent years has been the location of more important record­ings by people like Blue, Madonna and Kylie, is closing.

The first time we went there was in the late 1990s when we visited the Utah Saints as they were working with Mark 'Spike' Stent, who'd pre­vi­ously invented KLF records at Olympic and sub­sequently went on to do some other reas­on­ably decent stuff there too. On the day we visited had just finished working on the Utah Saints remix of The Osmonds' 'Crazy Horses' (which was amazing).

In the years since we've ended up having to trudge down there every now and again to interview people and listen to albums and singles while they're being recorded, but now EMI, who are in charge of the studio, are shutting it due pre­sum­ably to music going tits up and nobody being inter­ested in it any more etc etc.

Don't worry, Christmas will be over in a couple of weeks