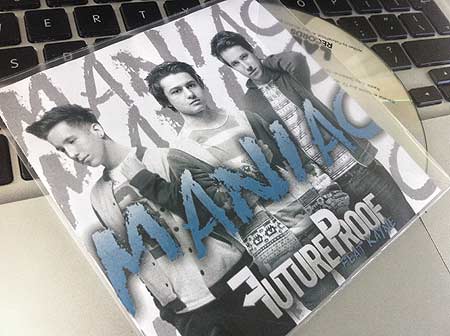 "I'm a maniac, I just don't know how to act around you — maniac, maniac, push it in and pull it back."

Not our words, readers, but the lyrics of never-going-to-be-a-hit new single 'Maniac' by Futureproof featuring Kayne. We should state at this stage that the Futureproof under dis­cus­sion here are is not the woeful X Factor boyband of the same name but a "London based producer/artist col­lect­ive". We're not sure we like the idea of a maniac pushing it in and pulling it back. Whatever happened to romance? At least buy us dinner first chaps.

The whole thing is very odd, really. Most of the bits in the video featuring guest rapper 'Kayne' on the roof (and let's be clear here, not since the heyday of early-90s Scottish 'spitter of verse' McHammer has one passable rapper stood to gain more from his name's sim­il­ar­ity to that of a slightly better artiste) are alright* but the shots of Futureproof are, well, not so good.

Sometimes releases aren't like this aren't exactly bad, as such -
they're just mediocre.

But this is def­in­itely bad.

Congratulations to all involved.

The Chatter Of Popjustice: "Sugababes are part of our tribe"