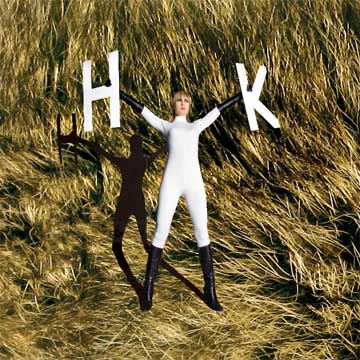 HK119 is the sort of super­styl­ised popstar who makes Roisin Murphy look like Sandi Thom but at the heart of her elegant and immensely absorbing elec­tronic pop are some great tunes and her second album, 'Fast, Cheap & Out Of Control' is a great follow up to the album we listened to a lot a few years ago then lost and forgot about. It's coming out at the end of September featuring various col­lab­or­a­tions with I Monster. The opening track, 'Mind', is today's Song Of The Day but the first single will be 'C'est La Vie' (tra­gic­ally not a cover) and that's out on September 22. We should probably have made 'C'est La Vie' Song Of The Day instead, really, espe­cially because it's better than 'Mind'.

The press release bangs on about the name HK119 being "a product code — an attempt to bring awareness to the con­tra­dic­tions of our society and the increas­ing ali­en­a­tion of modern man" — which is a coin­cid­ence because that's how The Saturdays got their name too — and while there's obviously a deep 'n' mean­ing­ful flavour to the whole thing songs like 'C'est La Vie', 'Liberty', 'Space Pt 1' and 'Divine' are straight­for­ward, amazing and really properly access­ible pop tunes you'll enjoy if you listen to  Goldfrapp, Chungking, Roisin, Ladytron and 'that sort of thing'.

Oh, and this is what came in the post today. 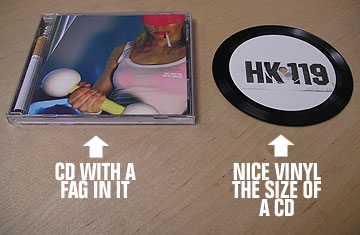 Joyriders feat Bros: the worst 'dance' record of the summer

The Saturdays: 'Up' is where they go from here