Today the BBC have unveiled the six songs and artist who'll be competing in Eurovision: You Decide, which will literally 'decide' (it's in the name!!) who'll represent the UK at this year's Eurovision Song Contest.

We've ranked them below.

Bonus game: Last October we were at Tileyard near Kings Cross in London. Tileyard's a sort of music-making complex full of studios and managers and things. Anyway, while we were there we saw this stuck on the wall in the café. 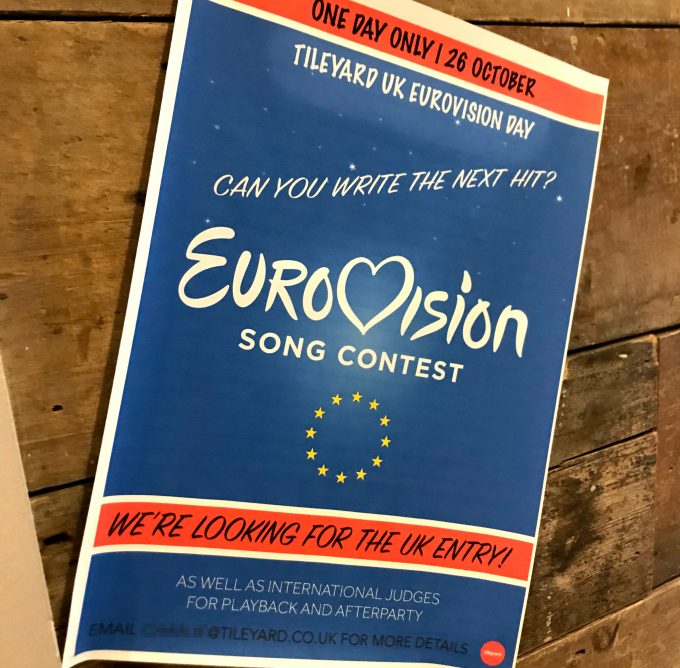 See if you can spot anything from Tileyard in these six entries!

Worst: I Feel The Love by Goldstone 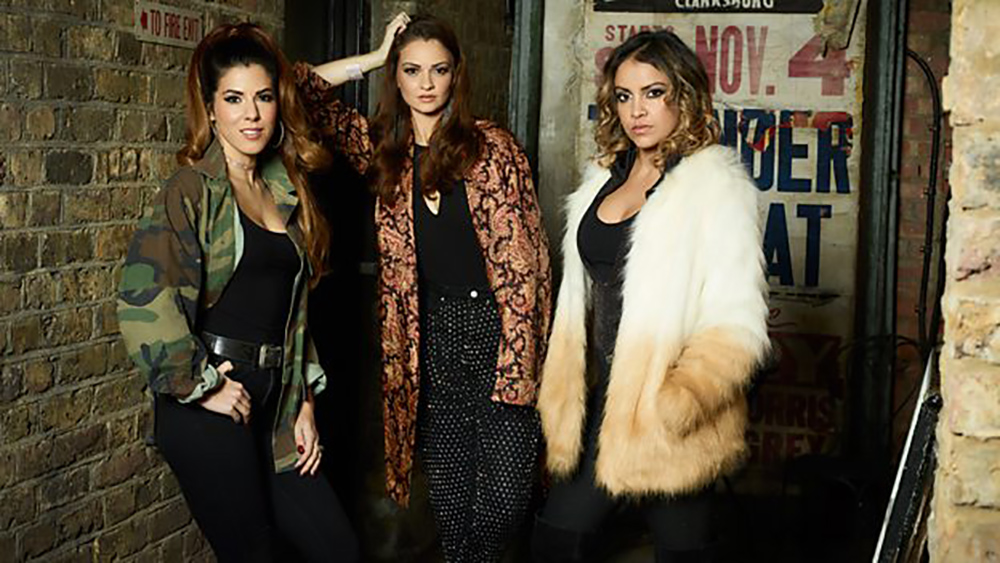 Who are 'Goldstone'?
Pictured here informing you that no you may not enter this private club because it has been booked out by the local Foxtons for a leaving do, Goldstone are the sort of girlband who with the right man­age­ment could at some point in the late-2000s have scored an ulti­mately fruitless minor devel­op­ment deal. It's 2018, though, and Goldstone tour corporate shows and regional Pride events with a set that if their YouTube channel is anything to go by appears to consist solely of them per­form­ing Bang Bang.

Do they, by any chance, have exper­i­ence in the world of musical theatre?
Aimie from the band won the BBC Voice of Musical Theatre award so that's a big yes. The only attrib­uted quote on this pro­mo­tional video is from The Stage, make of which what you will.

Who wrote this song?
Eric Lumiere, Joakim Buddee (who's written for Margaret), Laura White (who you may or may not remember from The X Factor, but she also co-wrote and appeared on Galantis' 'Love On Me'), Roel Rats.

What's the song about?
"We think the most inter­est­ing aspect of our song is that it's so hopeful," the band say. "It makes you feel positive about the world." Which is strange because, well maybe it takes a couple of listens, but the song left us seeing the appeal in total human extinction.

Is this song any good, even in Eurovision: You Decide's world of lowered expectations?
It is with deep regret that we inform you this is not a good song in any world.

Second worst: You by Jaz Ellington 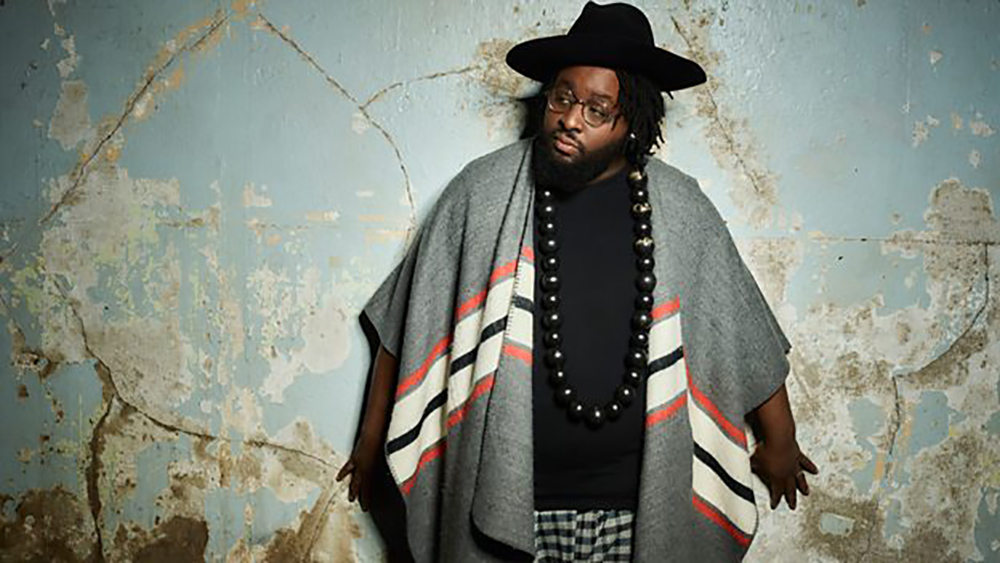 Who is 'Jaz Ellington'?
The man wondering if this wall will need totally reskim­ming or if he might be able to get away with filling the cracks AND IN A WAY THAT'S A METAPHOR FOR THIS YEAR'S EUROVISION HOPEFULS is Jaz Ellington. He's been involved in music for 15 years!!

Does he, by any chance, have exper­i­ence in the world of musical theatre?
Jaz is the only one of this year's Eurovision: You Decide entrants not sourced by throwing a copy of The Stage in the air and throwing a pen at it. Instead, the BBC Eurovision team have taken a totally leftfield  route, scouring the country's gigs and open mic nights over a nine-month period during which a team of nine music experts drew up a longlist of oh who are we kidding he's off The Voice.

Who wrote this song?
Herman Gardarfve (who wrote last year's UK Eurovision entry for Lucy Jones), and Laura White (again) along with Ashley Hicklin. Hicklin is the inter­est­ing name here — he's one half of a worth-invest­ig­at­ing duo called Bright Sparks but is also a really prolific (and often v good) song­writer whose songs have found their way to loads of inter­na­tional X Factor winners.

What's the song about?
The full quote supplied by Jaz is this: "The song is a story of two people in a rela­tion­ship. The person telling the story compares everything his partner does, to the one he truly loves. It's beautiful and yet sad at the same time, I just love it. #aud­ibleg­old." Let's gloss over the what-the-fuck subject matter and con­cen­trate on the inclusion of '#aud­ibleg­old' for a moment because, well, there are two pos­sib­il­it­ies here: 1) This statement has been emailed in, in much the same way that the entry it describes has been phoned-in, or 2) 'Jaz Ellington' got on the phone to someone at the BBC and at the end of his descrip­tion SAID THE WORDS "HASHTAG AUDIBLEGOLD" down the phone. As in Jaz 'Jaz Ellington' Ellington literally spoke those words. "Hashtag Audiblegold".

Is this song any good, even in Eurovision: You Decide's world of lowered expectations?
The lyrics are abso­lutely atrocious but the rest of the song succeeds quite well on its own terms, but it's too boring for Eurovision. 1 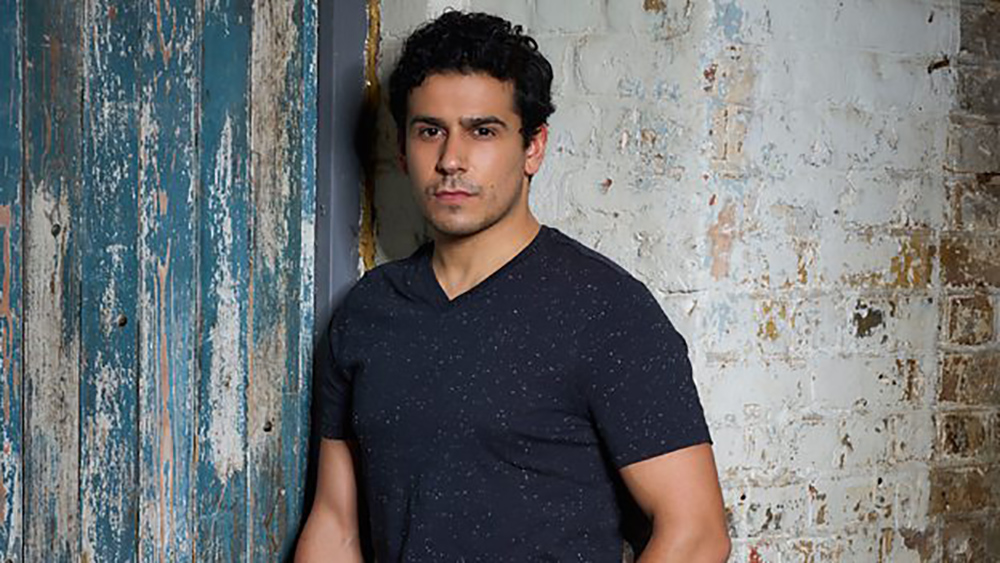 Who is 'Liam Tamne'?
The BBC's Eurovison site asked Liam for some facts about himself. His response: "If I was born a girl, I was going to be called Róisín. I’m a huge reality TV fan. I love Big Brother and The Real Housewives of New Jersey and Atlanta. I've recently become vegan." Fascinating, Liam. Do tell us more oh we're afraid that's all we have time for right now.

Does he, by any chance, have exper­i­ence in the world of musical theatre?
Well readers it's a yes on this. Liam has appeared in Wicked, Hairspray, Les Misérables, The Phantom Of The Opera and The Rocky Horror Show. Oh, and he's off The Voice as well.

What's the song about?
“It’s a great song and I believe many people can relate to it," Liam muses. "The message will resonate with a lot of people, as we all need that someone at some point in our lives to pick us up and whisk us away.” To be clear, this is a song about an astronaut taking someone's body into space, which is strange phrasing because it suggests, more than anything romantic, zero-gravity corpse disposal. Also, it would be extremely dangerous to take someone into space if they have had no training for that sort of thing. All in all this whole plan seems very impractical.

Is this song any good, even in Eurovision: You Decide's world of lowered expectations?
Do you know what, this song's not bad if you like this sort of thing, which we don't and you probably don't either. But still. Probably one Jonas Blue remix away from 330m Spotify streams.

Fourth worst and at this point we're straying into 'might one day listen to out of choice' territory: Storm by SuRie 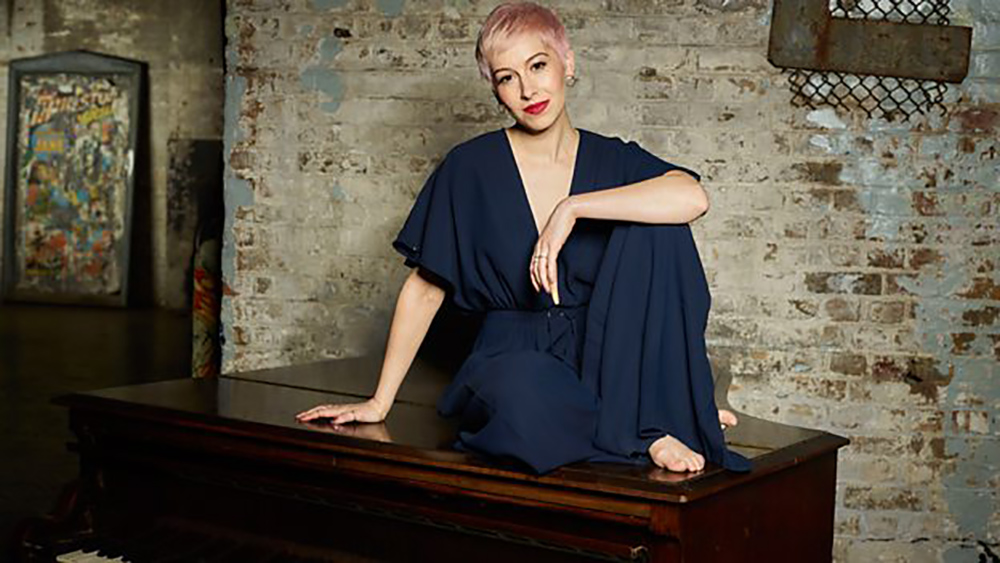 Who is 'SuRie'?
SuRie is actually quite good, you know. The best artist in this year's set of hopefuls, anyway. Here is her Soundcloud.

What's the song about?
It's a song about storms not lasting forever, which as well as being an inspiring message is also met­eor­o­lo­gic­ally accurate.

Is this song any good, even in Eurovision: You Decide's world of lowered expectations?
The Sigala-goes-Eurovision pro­duc­tion doesn't work quite as well as it should but this is a solid song in a Jess Glynne/Ella Eyre sort of way. 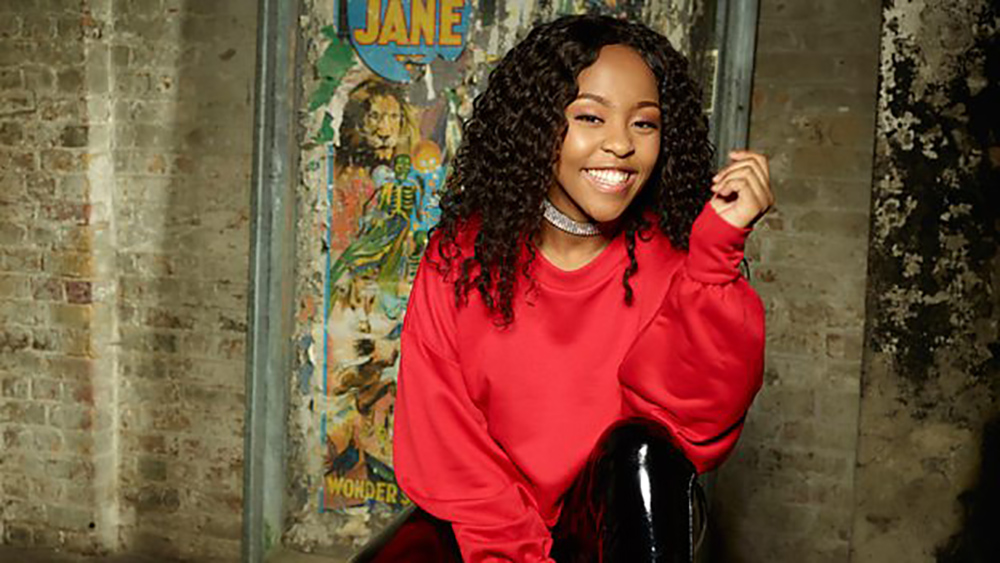 Who is 'Asanda'?
Recognise Asanda from the 2013 series of Britain's Got Talent? Probably not, it was fucking ages ago, but she was in it.

Does she, by any chance, have exper­i­ence in the world of musical theatre?
WHY YES!!! Asanda was Tallulah in a Lyric Theatre, Hammersmith pro­duc­tion of Bugsy Malone.

What's the song about?
It's a song about becoming famous or something. General positive vibes, you know the drill. "It is a unique song with a very energetic rhythm and has a tribal feel to it," Asanda has said. "I think the melody and the lyrics come together to form a very beautiful and inspir­a­tional message that is relatable to everyone." Perhaps that statement makes most sense if you generally hang around with people who want to be famous, which is probably true of most of this year's Eurovision: You Decide entrants. Imagine wanting to be famous, though. The whole thing seems like a massive ball-ache to be honest.

Is this song any good, even in Eurovision: You Decide's world of lowered expectations?
This is good enough to be the twelfth best song in Melodifestivalen, which is pretty good. Sadly it swerves a big chorus and hurls itself into a sort of drop/breakdown affair which is a bit dis­ap­point­ing but, well, it's 2018 isn't it.

Least worst, ie what you might even go so far as to call 'best': Crazy by Raya 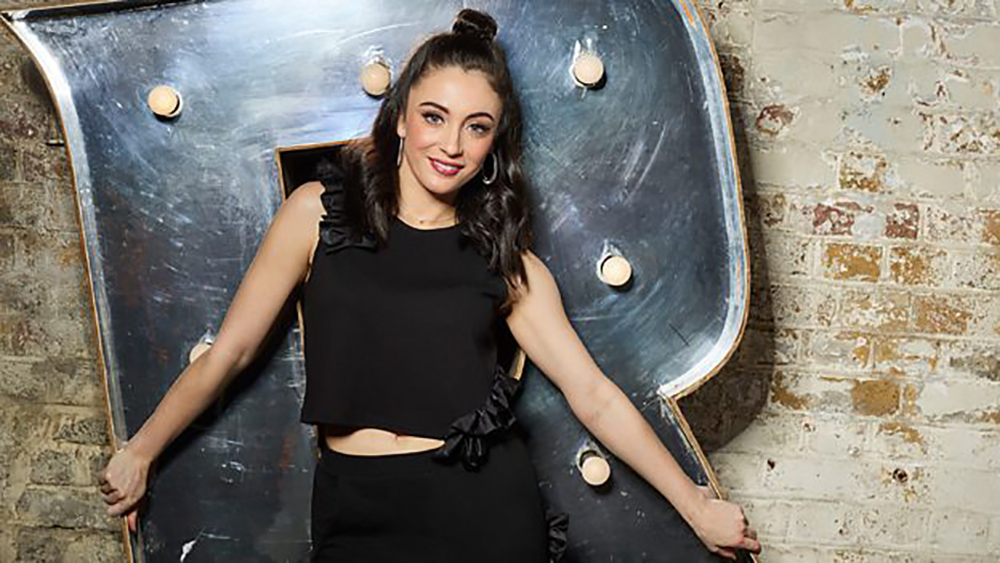 Who is 'Raya'?
According to her Facebook, Raya is "a truly seasoned and highly sought after triple threat artist with vocalist, dancer and actress all being accom­plished strings to her bow" (?) who is "regularly found featuring as the pk-callout vocalist on records around the globe after releasing a long awaited self-penned vocal album which was swiftly snapped up by hundreds of top producers in countries such as Mexico, Australia and across Europe".

Does she, by any chance, have exper­i­ence in the world of musical theatre?
Amazingly, yes. She's performed in the Legally Blonde musical and Elaine Paige is a fan.

What's the song about?
Notes RAYA: "It's extremely catchy and upbeat with a really fresh and com­mer­cial feel." (Reminder: it's def­in­itely RAYA saying this, they didn't ask your mum to review literally anything in the Top 40.) "It's all about that new guy or girl," RAYA continues, "who you can’t get out of your head no matter how hard you try.” Make no mistake: RAYA is breaking some exciting new lyrical ground with this one.

Is this song any good, even in Eurovision: You Decide's world of lowered expectations?
If you liked Louisa Johnson's Best Behaviour you a) are quite correct, for it was a banger of Biblical pro­por­tions, and b) may well quite like this. Proper chorus, "ooh-ahh" bits, reas­on­ably fresh pro­duc­tion, the 'full business'. For the first minute it feels like this might not be the song that offers the best chance of Eurovision glory but by the end you're thinking: "Actually, why not? Why couldn't this go all the way?" And the answer of course is that we did badly enough in Eurovision before the Brexit vote and now everyone really, def­in­itely thinks the UK pop­u­la­tion is 100% awful, and that's why, but it'd be good good to enter something non-shit wouldn't it?

ANYWAY: there's a 90-minute BBC 2 show on February 7, and that's when one of these songs will be selected as the UK Eurovision entry. We will be lodging a formal complaint if the show does not involve a hilarious joke involving Mel Giedroyc telling co-host Måns Zelmerlöw to take off his jacket. 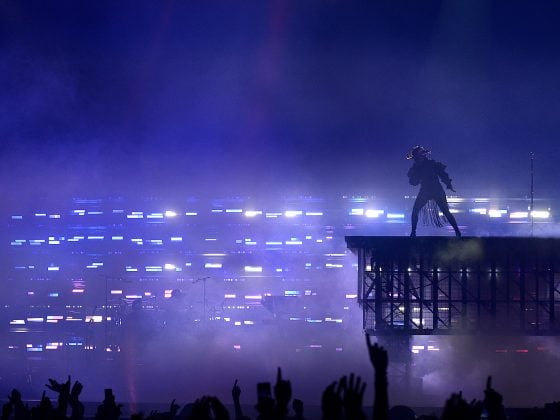 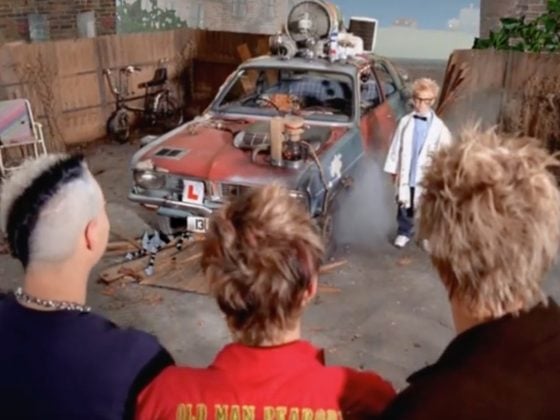