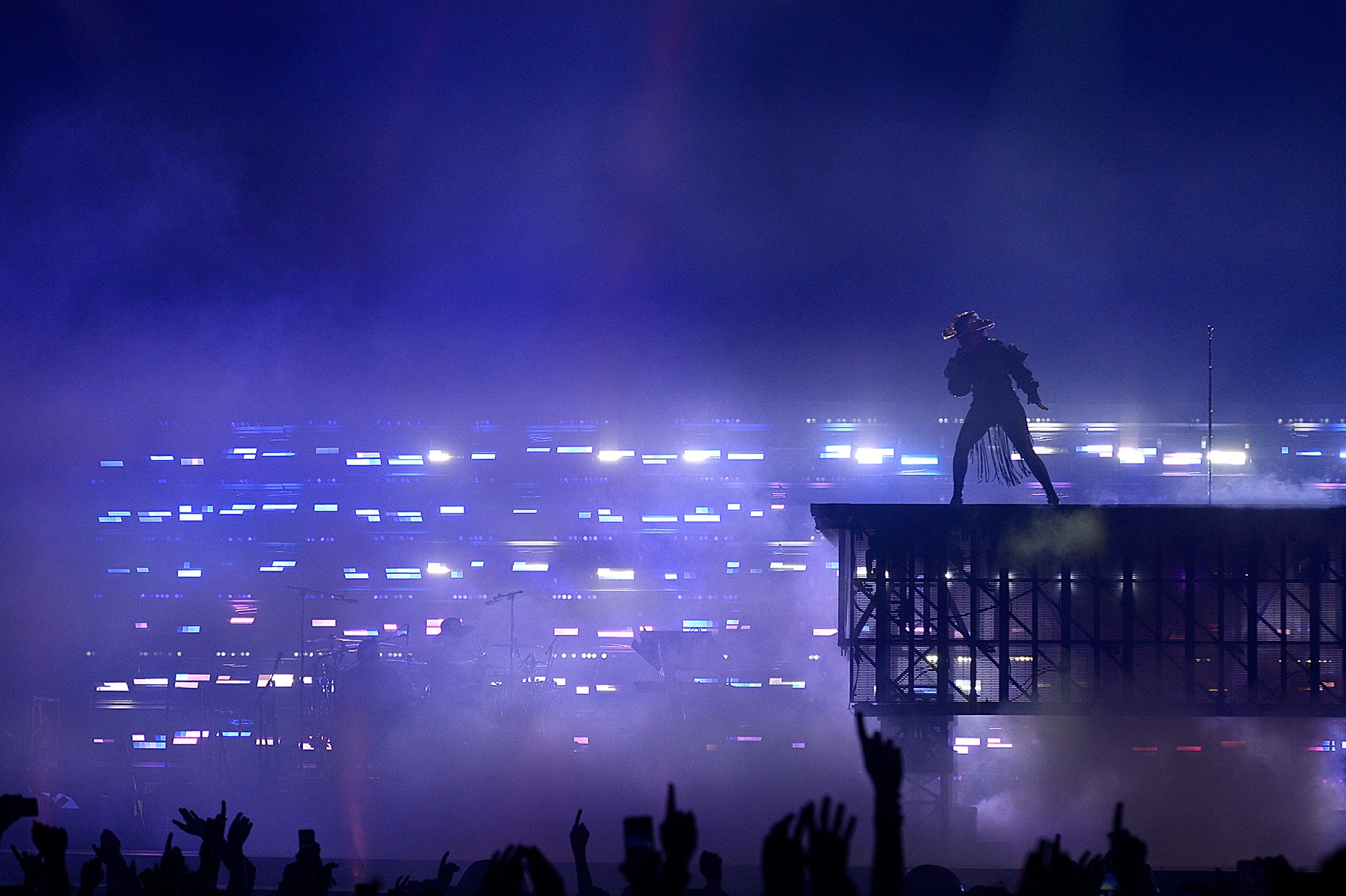 We went to see Lady Gaga in Milan recently. Sorry this review-style #content is, strictly speaking, a week late, but the per­form­ance of Bloody Mary (this post contains spoilers by the way — she does Bloody Mary for a start) we saw that night was so incred­ible in so many different ways that for the last week it has been impossible to consider the events of that evening at the Mediolanum Forum without without exper­i­en­cing shortness of breath, dizziness and and knee-based wobbliness.

It was, quite possibly, the best per­form­ance of Bloody Mary the world has seen or ever will ever see. There was smoke, fire and red leather. It was really good. If you're going to see Lady Gaga's UK shows (which start tomorrow) you are in for 'quite an evening'. And it's one that begins and ends with a hat.

Back in the olden days Popjustice wrote 1 about the volu­min­ous chapeau featured in Lady Gaga’s Marry The Night video. Hats make any situation amazing, of course, so you’d assume that by doubling the size of your hat you'd be nurturing a scenario twice as amazing as one where a regular size hat was present. And you'd also assume that any further increase in a hat's size would result in a similar amaz­ing­ness boost, but there is of course a ceiling and in the case of the Marry The Night video there's a specific ceiling, ie that of a motor vehicle. There's one shot in which the enormity of Gaga's hat made it difficult for her to get into a car.

The takeaway from all this was that there’s a point where any hat, and everything the hat might symbolise, can become so big that it’s just not practical. It's no longer stylish and amazing. It is a burden. AND IN A WAY (stay with this, if you haven't already bailed) that’s pop itself, isn't it? Lady Gaga's Hat Moment was probably the ARTPOP campaign, where ideas she'd been teasing through­out The Fame, The Fame Monster and Born This Way mani­fes­ted them­selves so hugely — with apps, flying frocks, art col­lab­or­a­tions and an album that felt like three different projects at once — that, well, it just wasn't really working.

So anyway, the Joanne show is bookended by a hat: the stetson that's made on-off appear­ances during the Joanne era. During the Milan performance's opening moments the hat's on Gaga’s head, sparkling in a spotlight and pretty much the only clearly visible thing on stage. As the show draws to a close,the hat is spotlit once again, sitting by itself on a piano stool on the C‑stage (because this is a Lady Gaga show and naturally one simple B‑stage is not enough). The LED piano has dis­ap­peared through a hole the stage with Gaga on top of it, but the hat remains.

It's a hat (is anyone still reading this?) worth dwelling on: rather than being a hat that sym­bol­ises confusion, it's one that rep­res­ents a period during which Gaga has laid the ground­work for what may well turn out to be her second imperial phase. 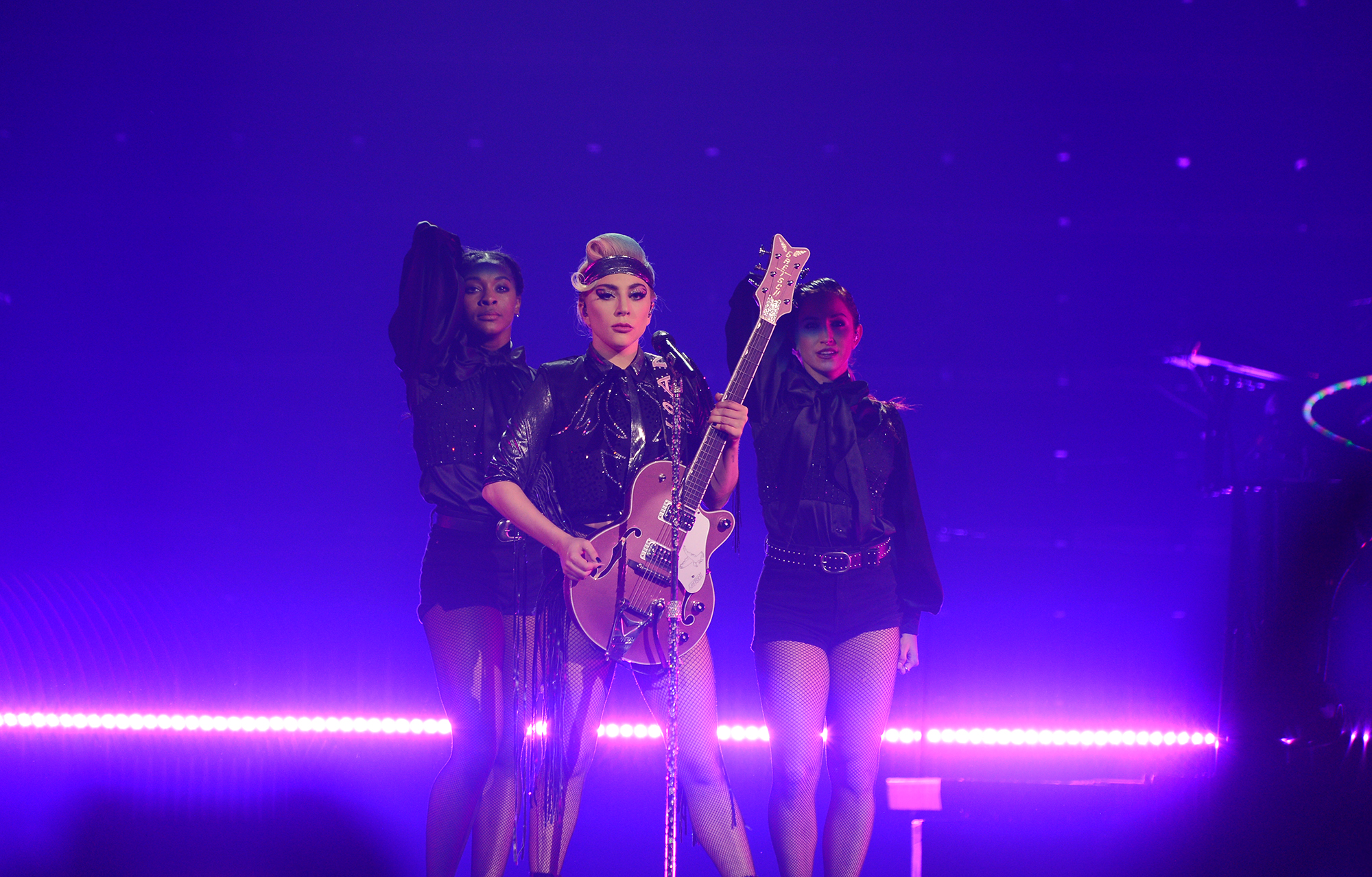 There was a chance, one supposes, that the Joanne tour could have been a load of twanging and hay bales, but what works so well about this show is the way it blends old-school Gaga with flashes of her more recent ~authen­ti­city.

It does start off in a stripped back way, although this is very much the Gaga version of stripped back so it’s not long before there are twenty people on stage. In any case at first glance the A‑stage is a long way away from the ludicrous haunted castle theatrics of the Born This Way Ball, and when Gaga kicks off with Diamond Heart the stage seems to be a simple black tiered affair with a riser in the middle. It's kind of how you'd expect a stage to look before the proper stage was built on top of it, but even­tu­ally you realise the entire stage is made of different, inde­pend­ently con­trolled risers: the whole thing goes up, the whole thing goes down, they go up and down at each end, there are video screens on the front. Much like the Joanne album, there's more going on beneath the surface than first impres­sions would suggest.

While a lot of the show revolves around Joanne (and Scheiße, for example, works so well with a metal edge that you wonder if it might have really been a rock song all along), there's no per­sist­ent attempt to sonically steam­roller earlier tours or sonic incarn­a­tions: a disco stick comes out for a faithful rendition of LoveGame, a keytar appears for Just Dance, Bad Romance is left intact and the full-on Poker Face choreo is all present and correct.

Not everything gets an airing, though: it's bad news for anyone hoping for a cel­eb­ra­tion of Cheek To Cheek, while ARTPOP is rep­res­en­ted only by Applause, which suggests Gaga herself takes a realistic view of that album's ongoing legacy. How to put this… Well, neither of these omissions feels like a disaster. 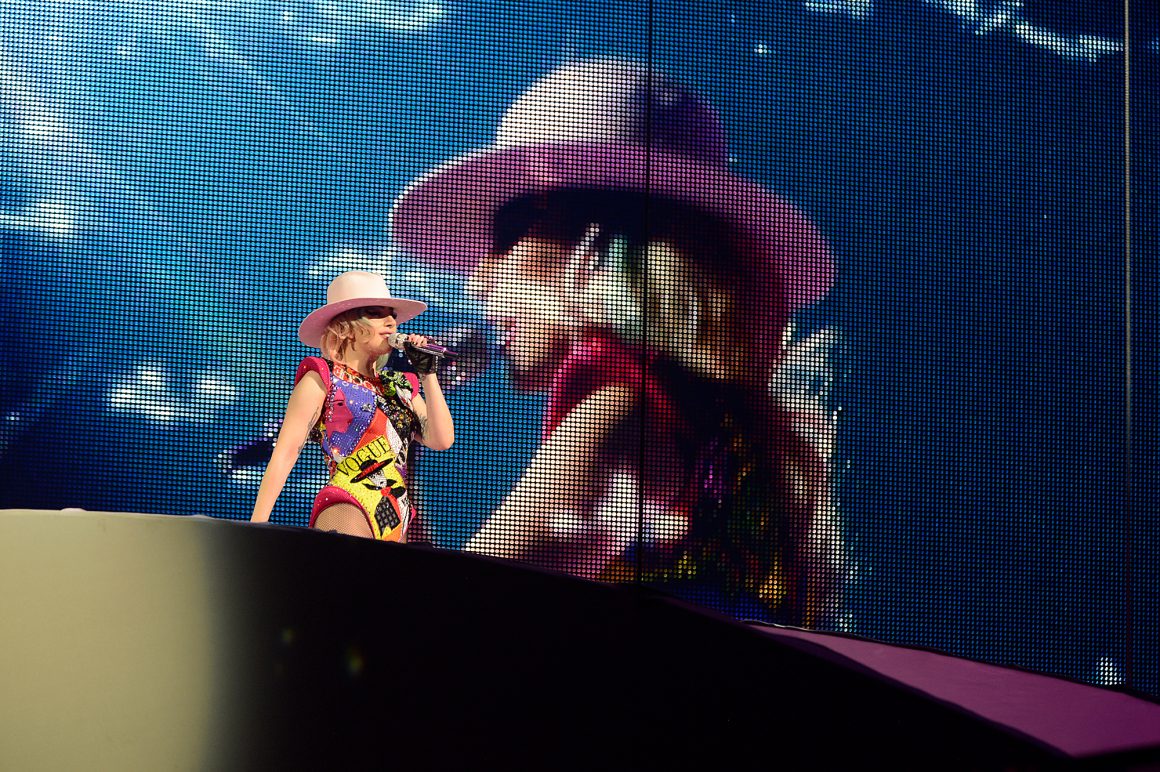 Gaga remains pop's absolute best at shouting “hands up!” during songs and proves remark­ably talented when it comes to bellowing "get on your mother­fuck­ing feet" then following it up with "it's only polite to stand at a party", and there's plenty of chat about equality and loving each other which anyone who's been to a Gaga arena show has a) heard before but b) quite frankly can't hear enough. But there are also speeches we haven't heard before about the chain of the events that gave Joanne its name and inspir­a­tion, as well as some strong spoken moments that are specific to the Milan show and the journey Gaga's grand­par­ents made long before she was born. "I don’t know if any of you are thinking of coming to America," she begins, prompting some mirth in the audience. "But even though you might not feel welcome now… If you put your mind to something you can do whatever you want to do." 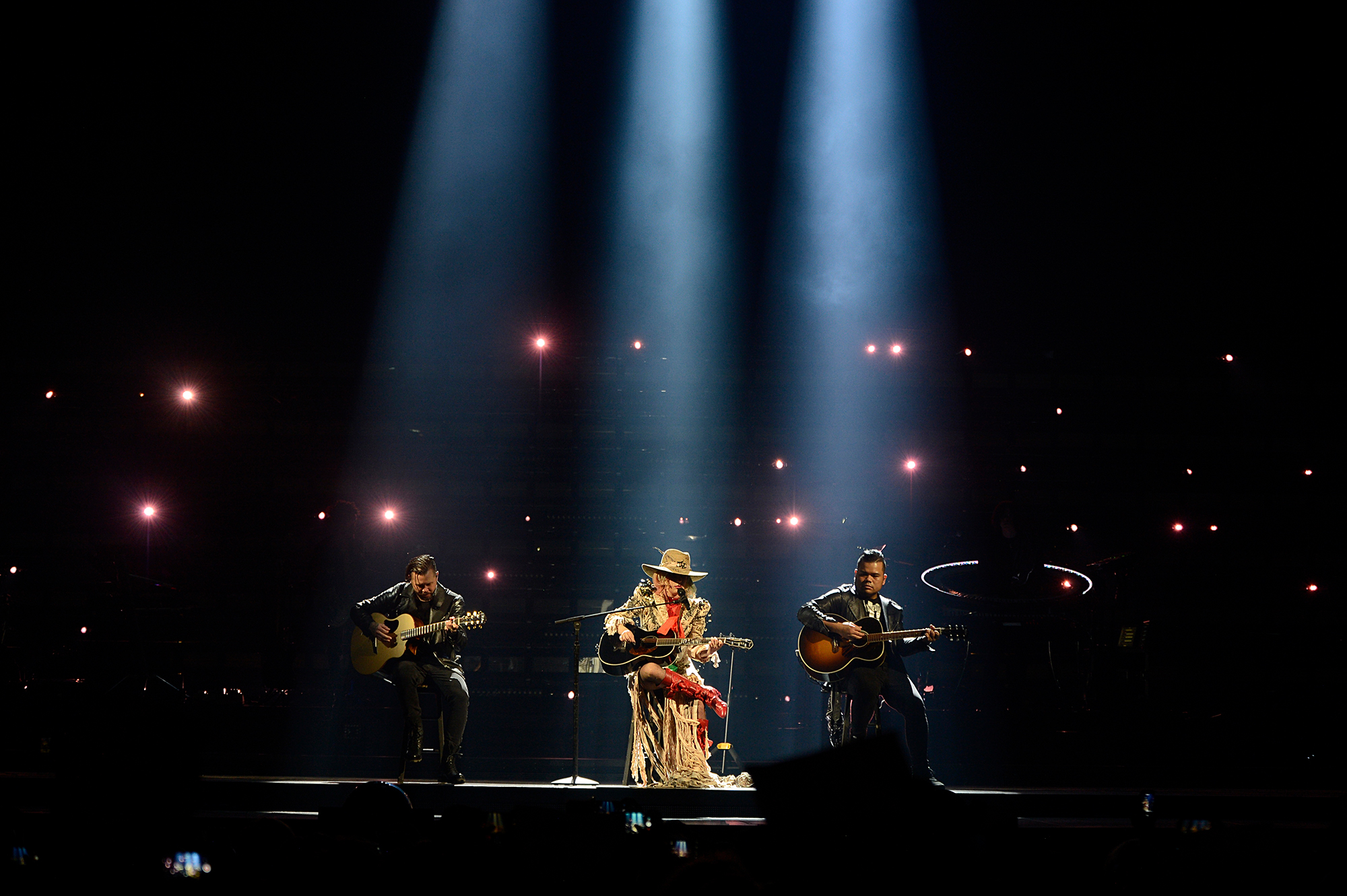 There are some brief frus­tra­tions in the show: The Edge Of Glory happens at a piano, Hair (Gaga's third best song, do not under any cir­cum­stances @ any of Popjustice's social media accounts) isn't here, and Telephone once again seems to be crying out for a city-specific, Taylor Swift-style welcome-to-the-stage special guest. But the show feels like a con­vin­cing bringing-to-life of the Joanne era, where the 2016 'Dive Bar Tour', for instance, felt contrived. 2

Obviously Gaga fans have his­tor­ic­ally shown very little animosity towards the concept of con­triv­ance — none of us ques­tioned whether or not she just so happened to roll out of bed one day and dress herself in the nearest packet of ham — but arti­fi­cial authen­ti­city has always seemed a little boring, and it did feel strange that an artist who clattered onto the world stage with the declar­a­tion that 'pop music will never be lowbrow' felt it necessary to move away from pop music when she had something personal to say.

Tonight's show makes sense of all that, though, and by Joanne-ing up a few old songs it's now more obvious that, say, Angel Down and Alejandro exist as different points on the same spectrum. 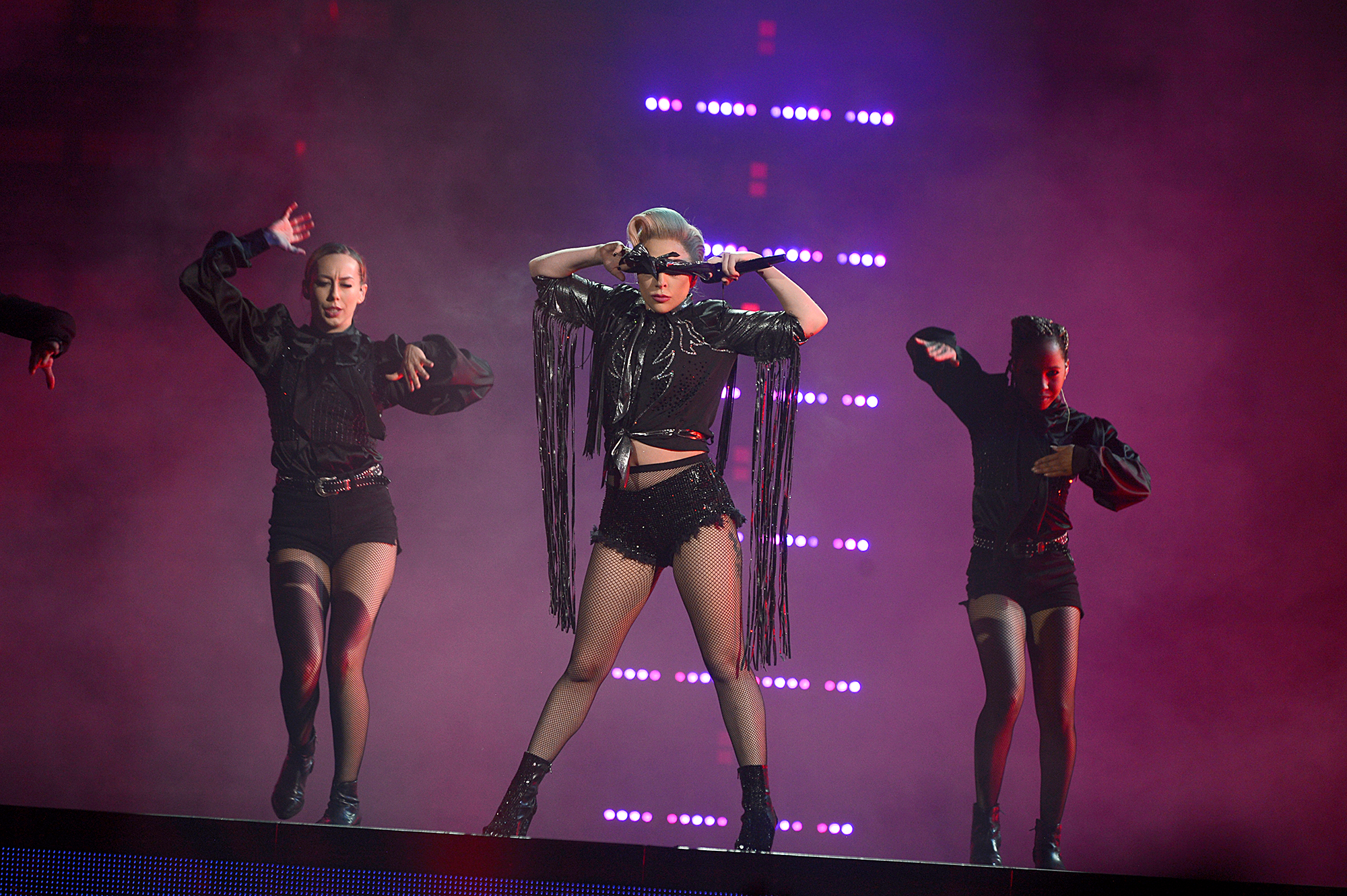 During Bad Romance the pneumatic stage floor rises up, while video screens are lowered from the ceiling: the Bad Romance video is playing on LED screens below Gaga while footage of tonight’s fans is broadcast live on the screens above her.

It as if she’s being squashed between her own history and her own fans’ expect­a­tions. She's not the first artist to have found herself in this position, but it's increas­ingly obvious that Joanne was the perfect way 3 for Gaga to negotiate a potential career cul-de-sac, and this tour is an exciting example of how it's possible to celebrate an impress­ive back catalogue while still looking to the future. 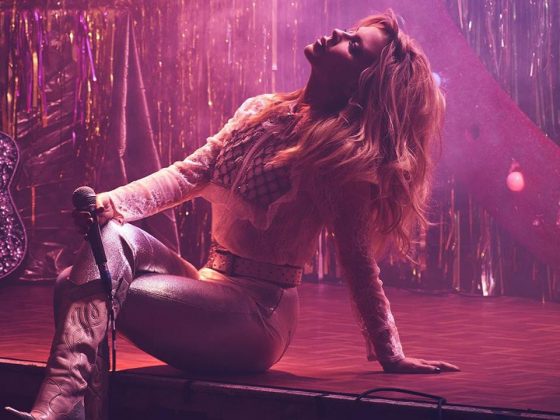 Kylie launches comeback single Dancing — and it's all about LIFE 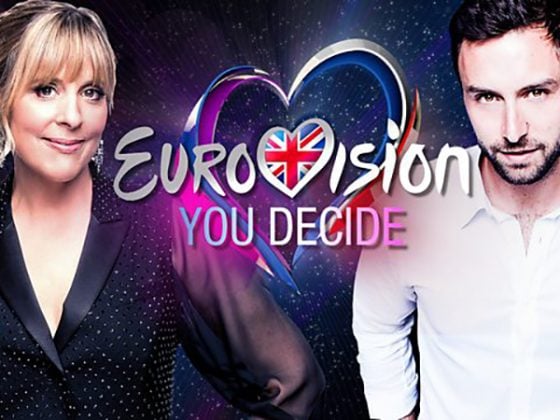