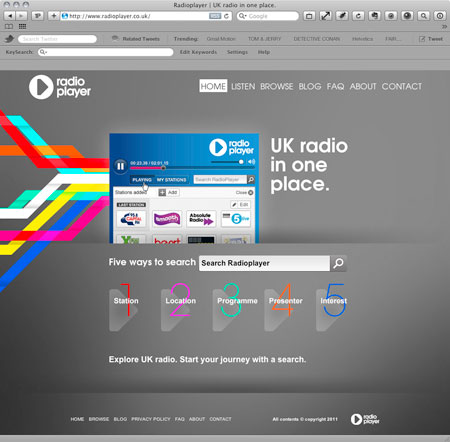 A service called Radioplayer launched in the UK yesterday.

It is sort of a big deal and at the same time sort of so obvious that it seems like it must have been around for ages anyway (except it hasn't): hundreds of UK radio stations online in, as the blurb goes, one place. It's like a radio in your browser, rather than loads of different stations scattered across your bookmarks.  It's notable, we suppose, mainly because when it
comes to web-based parties like this you can usually rely on the BBC to
turn up and shit on the birthday cake at the first oppor­tun­ity but in this instance the BBC is not just involved but also largely respons­ible for making it work. The Guardian offer a better summary than we can.

The selection of stations is limited — the first two we searched for, Kiss and Magic, didn't come up — but they promise that all the major stations will be there in due course and it's a general thumbs up from us so far.

We've been using a brilliant applic­a­tion called Radioshift, which also offers a number of online-only stations, for some time now so the Radioplayer exper­i­ence isn't, perhaps, quite as exciting as it otherwise might have seemed, but if you love radio as much as we do you'll probably want to tune in or whatever we're supposed to call it now. Let us know how you get on.

Brace yourself for some totally brilliant Swedish pop: 'Make Me, Break Me' by Vanbot