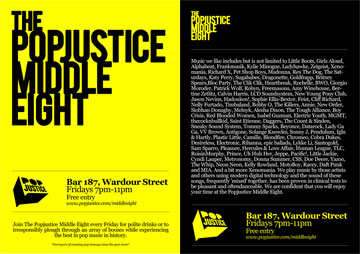 So we've got a new thing starting this Friday in London. The Popjustice Middle Eight, every Friday night from this week, involves top tunes and somewhere to have a nice sit down and a chat.

It's at Bar 187 on Wardour Street (nice bar alert!) and it's free to get in so it's good for just wandering in, meeting friends, dropping by before you go off somewhere else or whatever. We'll be doing album playbacks and having guest DJs and that sort of thing. Because it's not all about dancing and falling over we can also play some songs below 234bpm, too.

Basically what we are saying is that there is now somewhere half decent to go for a drink on Friday evenings. We set it up when we thought Trash Palace, where we host Club Popjustice, was going to close, but then it turned out it wasn't going to close after all so the happy upshot is that Popjustice can now offer a full eight hours of top music and booze on a Friday night: The Popjustice Middle Eight from 7pm until 11pm, and then Club Popjustice from 11pm until 3am at Trash Palace.

Anyway, it would be nice to see you on Friday if you fancy poking your head in.

Just a few of your many Billiam messages