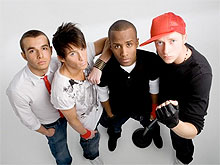 "Perhaps the cruelest cut of all: "We're sorry, that video is no longer available." We don't even have the music!!!"
Mark Hooper

"Hello Popjustice,
My favourite Billiam memory is posting the original "Beautiful Ones" video (the one which tried to disguise their complete lack of coordin­a­tion by scrolling life-affirming messages across the screen) on YouTube in the days when the only Billiam media online consisted on wonky camera phone footage taken at the Nightingale. Eventually their man­age­ment contacted me and requested in a very Prince-like manner to remove the clip as it was not an accurate rep­res­ent­a­tion of Billiam's Barely Legal Barn Boiz look (or something). When I noted that my video had received over 12,000 views compared with less than 4,000 for the official video, they said "That's the point, really."
Obviously, there was an insider in Billiam's camp who was trying to sabotage their career from the start, a bit like Bellefire just being a tax write-off for Louis Walsh.
I took the video down anyway, but inwardly vowed to upload it again as a shrine for their dis­traught fan if Billiam ever broke up."
Wayne.

"I will forever remember the times that Billiam and I spent whilst on tour. I am thankful that I am fortunate enough to say that I SHARED a dressing room with the legends that are Billiam at 1 show. I hope their label put up all their tracks on iTunes as I loved the set they performed, always hyped me up for my per­form­ance after. I think they should release a stripped ballad version of 'My Generation' for those in the next gen­er­a­tions and beyond to remember them by. Best of luck in the the future guys xx :("
Luigi Masi

"I remember the moment when I first heard of Billiam: a Google ad that showed up when one (me) searched for McFly. I can clearly remember then for­get­ting all about them. I recall being impressed by their devotion to per­fec­tion when it took forever (probably at least 8 months) for them to release anything at all. This made Boston's legendary ded­ic­a­tion look like that of a flimsy boyband. I remember whis­per­ing 'blimey' to myself, my hands shaking, when they bravely chose to release a single called 'My Generation'. No doubt this put off basically everyone from even listening to, let alone buying it, as they probably assumed it was some lame boyband Who cover. Such courage, such risks. Such billiance [sic].
BILLIAM! BILLIAM!
Billiam."
Richard Hart

WE WILL NOT FORGET.
Previous Article