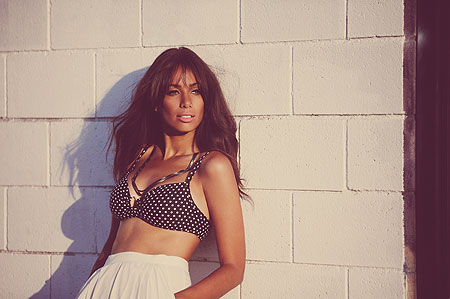 Yesterday we went to listen to the new, 125bpm Leona Lewis single, 'Collide'.

The plan had been for us to put a review online last night but we acci­dent­ally got drunk instead and ended up tweeting a load of stuff about the song from the Number 12 bus at midnight.

With the media in turmoil and journ­al­istic standards under scrutiny now more than ever, we think you will agree that our actions have been com­pletely reasonable.

WHAT WE SAID WHEN DRUNK:

"The Leona single is like a properly banging version of all those Coldplay songs you wish someone would put a donk on."

"There is a bonkers poppers o'clock six-minute Afrojack remix of the Leona single. That one gets the thumbs up."

""Crash into me at full speed" is such a good pop lyric."

"'Collide' was written by Autumn Rowe and produced by Sandy Vee, who have pre­vi­ously been respons­ible for AN AVALANCHE OF AMAZINGNESS."

"The song is on the radio tomorrow afternoon. It is perfect for the show it is being played on. (ie Scott Mills)."

"I think if the Leona single were a colour it would be purple."

WHAT WE THINK THIS MORNING

All the above continues to be 100% solid pop fact. The Alexis Jordan feel is pretty strong in the verses, the cascading piano riff is fairly 'When Love Takes Over'-esque (except that's just Coldplay-down-the-disco anyway so our original point still stands), and the chorus is full-on Leona. The structure struck us yesterday as really jarring — it only really kicks off halfway through the second chorus, which is fine, but when it gets to the end of the second chorus the song, er, ends. Listening a second time you sort of figure out that the pre-chorus for the first chorus ends up func­tion­ing as a middle eight on its second appear­ance, but it's still quite odd. It works though. Despite the banging­ness 'Collide' has a little bit of the sort of darkness 'Bleeding Love' had, perhaps partly because of the brutal imagery (it's no "you cut me open" but we still think "crash into me at full speed" is a really powerful pop lyric). Part of us feels a twinge of sadness that — with what seems like the entire pop community hurling itself into an endless club-hopping downward spiral — Leona too has felt the pull of the dance­floor, but 'Outta My Head' from the last album hinted at the pace picking up a bit in the future, and 'Collide' does feel like a natural extension of that. And, like we said, this isn't yet another pathetic lowest common denomiguetta club-pop waste of space. The sounds might be elec­tronic and danceable but the song would easily support a more tra­di­tional Leona enormoballad
pro­duc­tion and Leona's vocal per­form­ance is dignified and electrifying.


In the press release she is no longer a Global Songstress and is now Global Singing Superstar.

Here are some of the songwords so you can sing along when Scott Mills plays it on Radio 1 later today. It's good that Scott is getting the premiere — the song feels like it was built for Ready For The Weekend. 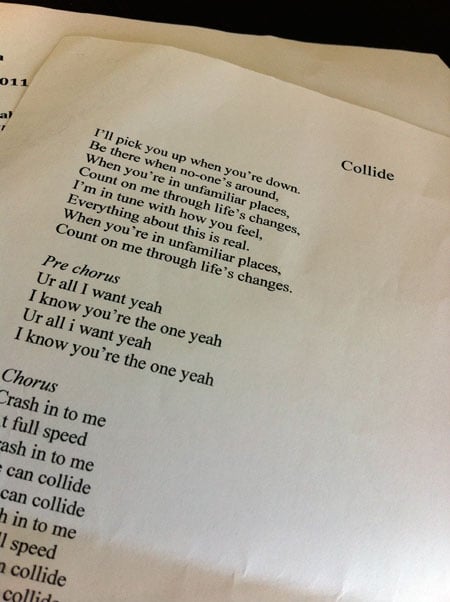 Finally if you'd like to keep reading keep keep reading,  here is a Q&A that's being handed out to 'the media'. The bottom bit is cut off in this picture but that bit's in Gordon Smart's story so not to worry. 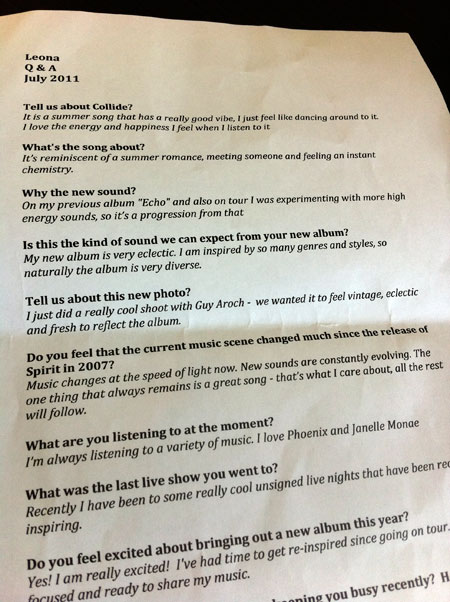 1. Leona's back.
2. The song's brilliant and the big euphoric pop sound makes sense at a time when nobody really needed yet another Leonaballad as a lead single, but it does all that without com­prom­ising Leona's Global Songstress Integrity.
3. We're feeling a bit hungover now.

EDIT: If we can all overlook the fact that we failed to identify the fairly famous piece of music this song uses for the piano riff, that would be great. CHEERS.