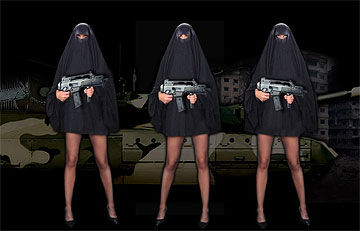 It's been a while since we wrote about self-styled 'Spice Girls from Hell' PayTV, the Swedish pop trio who ter­ror­ised the Swedish Eurovision heats a few years ago with 'Refrain, Refrain', a song whose main refrain was:

Well, they're back again (they've sort of never been away, really) with a fairly brilliant new single called 'Fashion Report' and they've pulled out all the stops for the video, a super­styl­ised rush of images and posturing which ranges from the mind­lessly pro­voc­at­ive to the oppor­tun­ist­ic­ally con­tro­ver­sial. It also features one of the band's members doing the hoovering.

So, for all of you com­plain­ing that The Saturdays aren't edgy enough: is this what you want? IS THIS WHAT YOU REALLY WANT??? ("Yes" — everyone.)

The full PayTV video's here, if you'd like a look.

Billiam hit the charts — bow down!

Why so glum, Solange? You're about to have a massive hit record