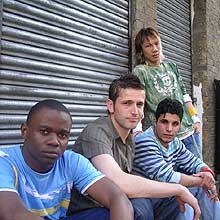 There is a doc­u­ment­ary on Channel 4 next week. It's called Fame Asylum and it's about putting together a boyband whose members are four asylum seekers.

"Can a boy-band made up of four asylum seekers cut it in the com­pet­it­ive world of pop music?"

Here's a clue: no, because these days a new boyband made up of five boys called Gary, Robbie, Jason, Howard and Mark couldn't even cut it in the com­pet­it­ive world of pop music.

Why do people in tele­vi­sion — the people who've brought us shows like Totally Boyband, Boys Will Be Girls and now this — think that
there is anything easy about putting together a boyband?

Well, the truth is that they probably don't think there's anything easy about putting together a boyband with a view to chart success — but they do know that it's easy to get a TV show com­mis­sioned by using boybands as a theme into which unlikely stars (boys dressing as girls, boys who used to be in bands, asylum seeking boys) are crow­barred, usually for the enter­tain­ment or amusement of the viewing public.

The whole Fame Asylum thing has been put together by a man called Richard Dedomenici. Here is some inform­a­tion about Richard from his website. (We think he might have written it himself.)

create the kind of uncer­tainty that leads to possibility."

"The band is designed to alter attitudes towards immig­ra­tion issues among the difficult to-reach opinion-influ­en­cing female adoles­cent demographic,

For someone attempt­ing to shift paradigms, Richard seems bizarrely ignorant of the fact that if you want to appeal to female adoles­cents only a fucking idiot would think, in 2006, about using the boyband — a pop concept so irrel­ev­ant to most teenage girls that you'd be better off with knitting patterns.

As for the band them­selves — they're called Status - they can't sing, can't dance, have no stage presence, look dreadful and their song, 'A Guy Like Me', is com­pletely awful.

HERE IS THE NEWS. 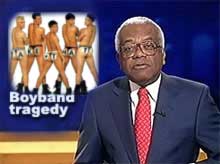 BONG!
There is literally no demand for a new boyband. That does not mean 'there is a gap in the market'. It means 'there are no big boybands simply because nobody

BONG!
Just because Take That are back, selling records to women in their late twenties, it is com­pletely illogical to think that this has paved the way for

boybands, selling records to girls in the early teens, to succeed on any level.

BONG!
Don't start on the whole 'ooh, pop goes in cycles' business — if this was true we would have seen a skiffle revival by now. Isn't is possibly just the case

that the boyband, in the tradional sense, was a his­tor­ical pop anomaly which made sense between 1989 and 2002, and that attempt­ing to revive its fortunes is

just pissing in the wind? And that the only way the concept of the boyband is in any way appealing is as the basis of a TV show?