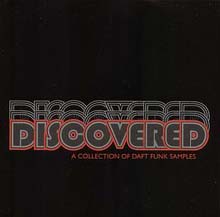 Here's a good idea for a com­pil­a­tion album. You'd never believe it, but Daft Punk sometimes use samples in their music.

You may, in fact, have already seen this YouTube clip which proves that Daft Punk are lazy thieves who have never had a single idea in their pretend-robot heads and are just like totally uncre­at­ive and haven't given not just the songs in question but in fact the entire world of digital pop a massive kick up the arse.

Anyway, songs sampled by Daft Punk across their three albums (and Stardust) are on new com­pli­ation album 'Discovered: A Collection Of Daft Punk Samples' which makes more inter­est­ing than amazing listening and, par­tic­u­larly in the latter half of the album where things start to drag a bit and the featured tunes become less and less listen­able in their own right, is a good showcase for Daft Punk's talent at somehow hearing bits the rest of us don't.

It is the same as some people being able a plank of wood and a few pieces of string sound amazing. Innit.

Anyway, the album's out in two weeks on Rapster.