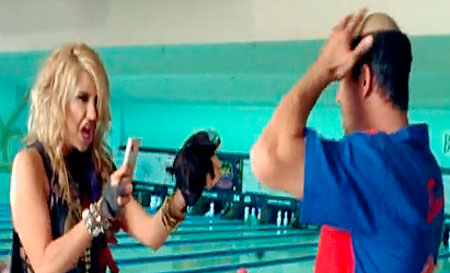 » Well we hate to break this to you readers but Ke$ha is just OUT OF CONTROL in the 'Blah Blah Blah' video. She's simply a crazy party biyatch and there's nothing you can do to stop her!!!!!!!

» At one point Ke$ha TAKES A WIG off a MAN WITH AN UNCONVINCING BALD HEAD and FILMS IT. That is how out of control she is. Does she have no respect for men wearing wigs on top of fake bald spots? We bet she is going to upload that LOLtastic video to a popular video sharing website so that it can 'go viral' just like that bril­liantly con­vin­cing footage of her defacing the Hollywood Sign.

» Is it just us or does the member of 3OH!3 who looks mar­gin­ally less like the kid who used to sell weed at college seem to change height during the video: head and shoulders above Ke$ha in one shot, the same height in another? Perhaps in some shots he is in heels — which would make sense because Ke$ha loves hanging out with DRAGQUEENZ because they are so FUN.

» Ke$ha has clearly been told by someone that if you hold your head and look upwards that means you are CRAZY and POSSESSED BY THE SPIRIT OF FUN and LITERALLY OUT OF CONTROL.

» The bit where she jumps in the air is clearly amazing.

The Newsdump, Feb 24 2010: from Nash maybe coming to your town to Rihanna turning frowns upside down

10x points of amazingness re Japayork