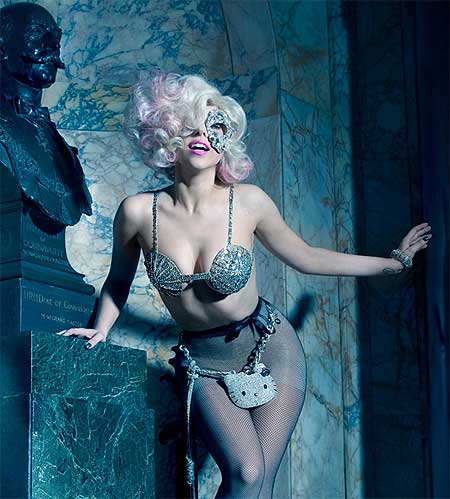 A quick catch-up on the latest musical bits of bobs from the last week or so in the world of Lady Gaga.

'Bad Romance' was premiered at Alexander McQueen's Paris Fashion Week show. It's very much a 'core brand values' sort of affair. It is also very much amazing.

3. New album.
In a shock move by Universal Music, Lady Gaga's 'The Fame' re-release — 'The Fame Monster' — isn't going to be a total cash-in job. In a statement press-released last night, Lady Gaga explains that the second disc of new tracks is something quite special. "On my re-release 'The Fame Monster', I wrote about everything I didn't write on 'The Fame'. While traveling the world for two years, I've encountered several monsters, each rep­res­en­ted by a different song on the new record: my ‘Fear of Sex Monster,’ my ‘Fear of Alcohol Monster,’ my ‘Fear of Love Monster’, my ‘Fear of Death Monster’, my ‘Fear of Loneliness Monster’, etc. I spent a lot of nights in Eastern Europe, and this album is a pop exper­i­ment­a­tion with industrial/goth beats, 90s dance melodies, an obsession with the lyrical genius of 80s mel­an­cholic pop, and the runway. I wrote while watching muted fashion shows and I am compelled to say my music was scored for them. I also composed a ballad for the album — 'Speechless', a song for my father, and it's my favorite work of all. I wrote every piece on the road — no songs about money, no songs about fame. I wrote it for my fans, so I wrote everything in between".

It's fas­cin­at­ing, isn't it, how Lady Gaga has such a clear but also stylised way of describ­ing what she does — it comes in very subtle flashes but it's a quality that none of her con­tem­por­ar­ies or peers can really match.

Think of Lady Gaga, then think of the opposite