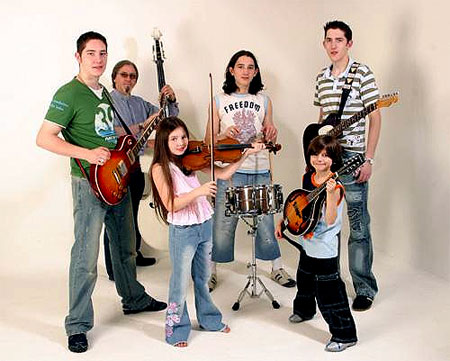 We're grue­somely fas­cin­ated by Beardsmith, the winners of GMTV's 'No 1 Family' com­pet­i­tion. From the GMTV website: "Neil set up the band with his family 10 years ago. He was a scout leader and his children were scouts and guides. The local village wanted the scouts to take part in a local fair, so he got his children together and formed a band. Everyone said how brilliant they were and they have been playing in a band together ever since."

The 'No 1 Family' judging panel included The Saturdays' A&R 'guru' Jordan Jay, a Nolan, and 'music impres­ario' Jonathan Shalit. Shalit is the walking, talking, contract-nego­ti­at­ing embod­i­ment of everything people talk about when they discuss 'music industry men in suits'. He is 'the man' young artists are told to avoid. If you think about all the self-appointed music revolu­tion warriors bleating on about brave new futures for the world of recorded and unre­cor­ded music, and if you think about all the blogs, and think­tanks, and con­fer­ences and podcasts they're involved with, and if you think about all these ways they advise new artists to take control of their careers instead of signing their lives away to 'the man', and if you then think of Jonathan Shalit, you begin to wonder whether Shalit's retire­ment or sudden and of course very sad death might actually calm everyone down a bit. You wonder whether Shalit dis­ap­pear­ing from the world of main­stream music might make all the DIY evan­gel­ists suddenly go, 'well the current music industry model is outdated and needs some work, but actually with him out of the way it's about five times less terrible than it was this time last week, maybe give it a try'.

Anyway you can get the general feel of 'No 1 Family' and Beardsmith in this clip.

Our favourite bit is at the two minute forty five point when Shalit is really hamming up the tension and drama and, behind him, some old love's having trouble with a Mint Imperial. Brilliant.

The Cheryl Cole album: a review