This is the video for Nelly Furtado's next single, 'No Hay Igual'.

For those of you unable to watch YouTube videos, here is what happens:

We think that the man in the video may have caught your eye. His name is Rene Perez and he is the frontman of a reggaeton band called Calle 13. Here's a picture of Calle 13. 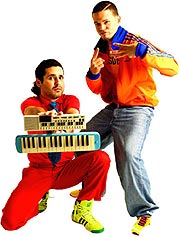