Here are some pictures of Banksy's latest work. 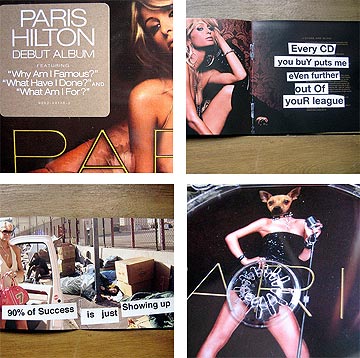 In case you missed the story over the weekend, the artist swapped 500 retail copies of the Paris Hilton album with his own, doctored versions. As you can see from the image on the bottom right, he inad­vert­ently designed the cover of the next Goldfrapp album 'to boot'.

You see Paris is only famous because of her asso­ci­ation with other people and her desire to recreate things which other people have done far better — and with more ori­gin­al­ity — in the past. In stark contrast, though punc­tu­ated with flashes of genius, Banksy's profile is never AT ALL dependant on press attention from riding on the coat-tails of other people's work in an unima­gin­at­ive retread of a tradition which is at least 50 years old.

Look — here are some more of his amazing musings on the culture of celebrity! 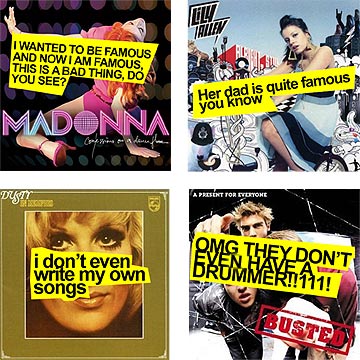 Perhaps Popjustice readers have seen other album sleeves hil­ari­ously defaced by someone who doesn't really 'get it'. If so, you can email them in and we'll show the most 'bril­liantly inventive'.

This is very good.