Look at this, it's the Soho Hotel, which is a hotel in Soho. 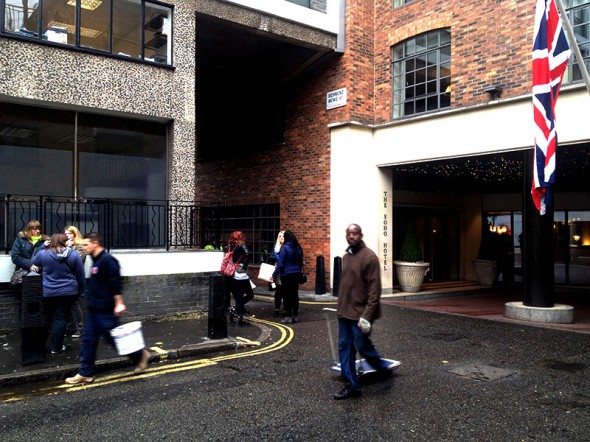 But why are there between six and eight (probably six to be honest) fans outside? Well, this morning we went to a special event at this hotel.

It was an event at which Busted told the entire planet that they were going to split up due to Charlie from the band having finally had enough.

It was a dark moment for pop music and humanity in general but we even­tu­ally got over it because at the end of the day we still had Girls Aloud and, anyway, McFly were knocking around by this point so it didn't feel like Busted were gone completely.

But actually, they were gone. That was it.

We really loved Busted. They came along when pop was becoming a rather barren place, and they happened a bit by accident. Or if not exactly by accident, then certainly unex­pec­tedly. They didn't have a massive man­age­ment company behind them, they hadn't come from a huge TV show (which, even by 2002, was quickly becoming the music industry's easiest and therefore chosen and therefore sup­posedly 'only' way of launching acts), and they didn't have the world's biggest writers or producers pumping hits into their faces. Labels kept trying to launch boybands and it wasn't working, but Busted came along with their boyband-not-boyband routine and it just seemed to make sense.

Also, the three members of the band were extremely funny and kind of eccentric in three quite different ways. They were always fun to interview or go on tour with.

Obviously Charlie had to go off and do his Fightstar thing and that makes sense today just like it did when the band split, but it still hurts.

Anyway McFly have continued to trundle along, and with some high profile reality TV appear­ances and knobs-ahoy pho­toshoots they've done a pretty good job of keeping their heads above water when most of their peers have dis­ap­peared, but at today's special event it was announced that they would join Matt and James from Busted to become McBusted.

We'd argue that the trick with these compound names is that neither name should appear in full, which is why McFlusted is about 87% better than McBusted, but it's too late to change so there you go.

Doors opened at 10.30am but we didn't want to look too eager, so we arrived at about 10.31am. You'll remember that the invite promised breakfast and while there were no sausages on offer we did find some miniature bacon-in-baps, and some egg sand­wiches. And some bacon sandwiches. 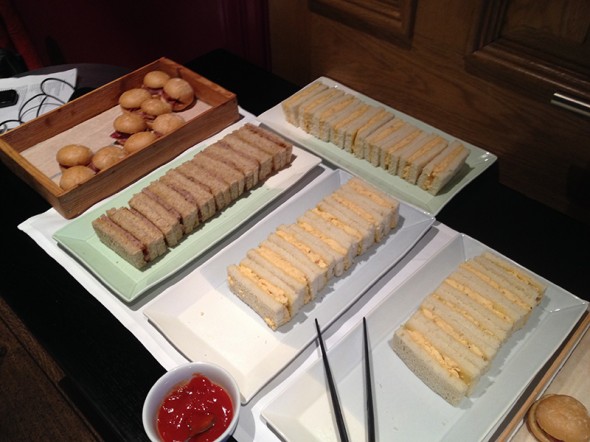 You can tell the Soho Hotel is a posh estab­lish­ment — they've 'decanted' the tomato ketchup into recept­acles we can only describe as RAMEKINS.

Here's another shot of the breakfast. 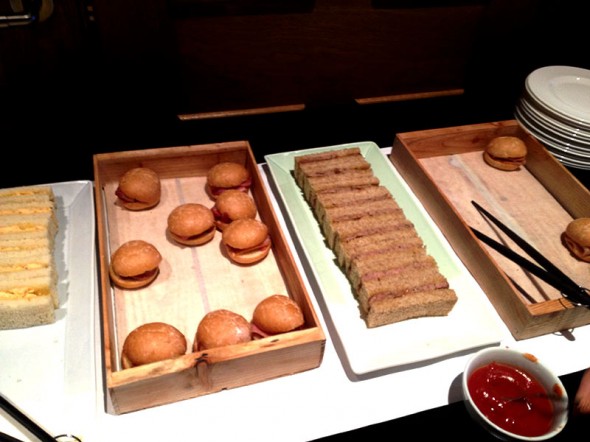 Before the proper press con­fer­ence started we were kept in a room with a TV in the corner. The TV had photofit faces made from James and Matt and Tom and Danny and Dougie and Harry and Not Charlie. 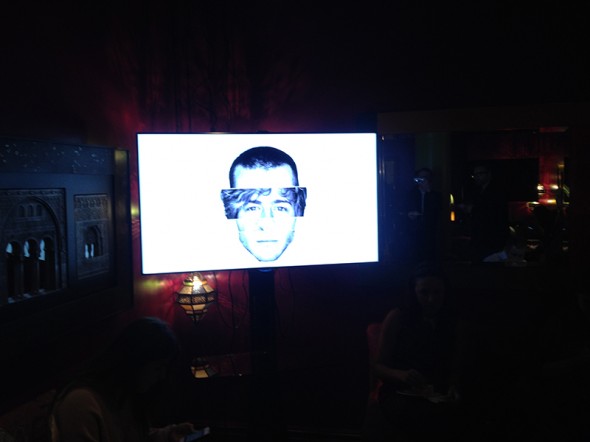 It was a bit like watching an episode of Crimewatch in which detect­ives make one last ditch attempt to trace those respons­ible for repop­ular­ising 7" picture discs in the mid-2000s.

Here are some members of the media. 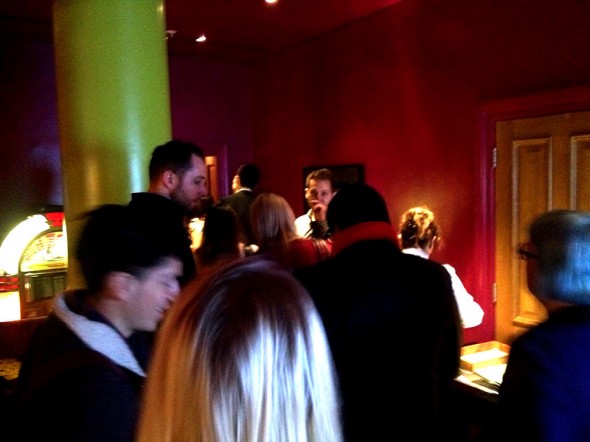 After a while we were led into the proper press con­fer­ence room. 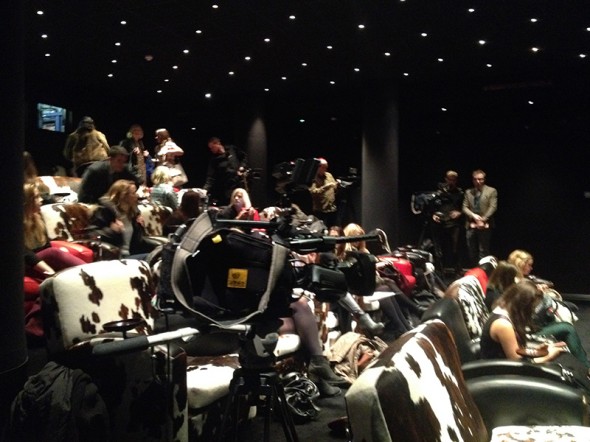 Emma Willis appeared, and made some amusing comments about it being 'bring your wife to work day'. 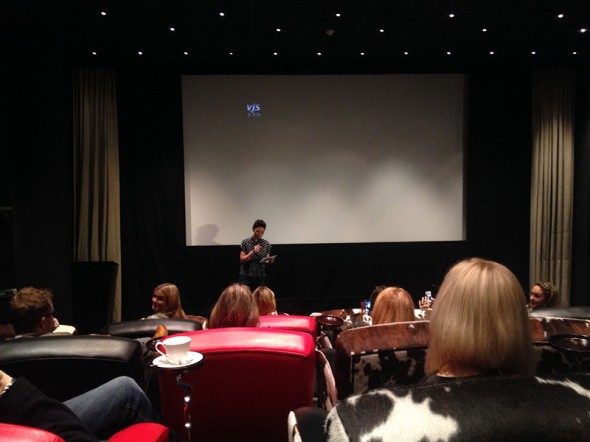 Then there was a video. It started off with a news report from 'back in the day' regarding Busted's SAD DEMISE then there were some black and white clips of Busted and McFly talking to someone off camera about how they decided to get back together etc etc. 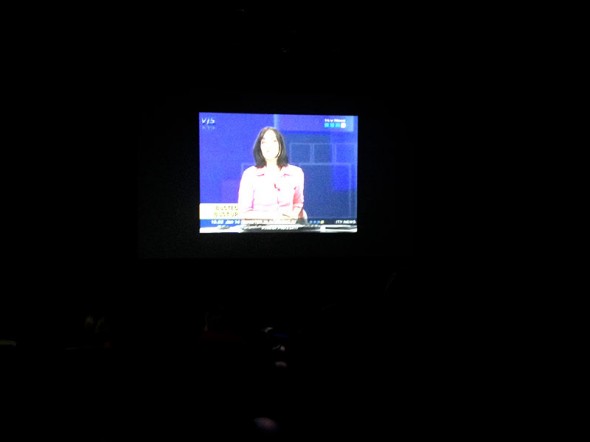 After a while the interview segments were inter­spersed with members of McFly and Busted walking one by one onto the screen and standing in front of that height chart thing from the first Busted album sleeve. 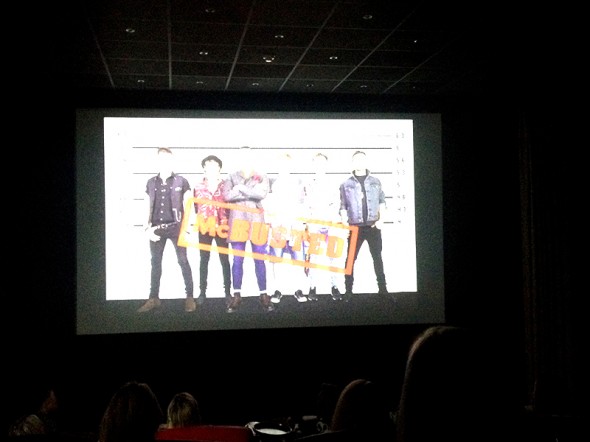 Matt is the best dressed of the lot, not that you can tell in our shit photograph.

Then McBusted came in and there was a polite round of applause. 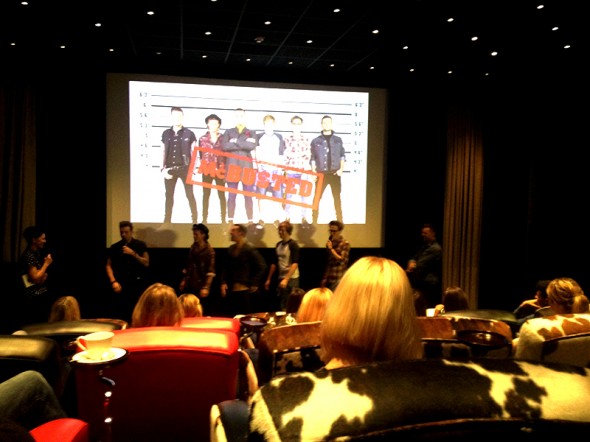 As you can (probably not) see in our shit pho­to­graph the 'lads' were wearing this morning what they are wearing in the pho­to­graph. It's good that they're not throwing money around on things like 'two sets of clothes' but hopefully they'll at least have an extra set of underwear by the time the tour comes around. 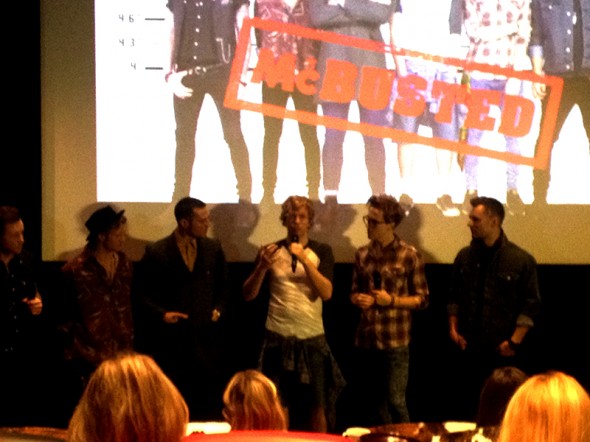 (On the subject of the tour, they just started talking about it without actually announ­cing it properly, which was a bit like at the Girls Aloud press con­fer­ence last year when they went 'HIYYAAAAA' and started chatting but actually forgot to announce anything.)

(But the tour is happening next spring.)

(What we think is this: there'll be the tour next spring and by that point some sort of TV deal will be done if it hasn't been done already, then that gives Busted — not McBusted — the summer to record an album for release in 'Q4' 2014, with a single late summer to coincide with the TV show being on.)

One thing that did seem inter­est­ing during the press con­fer­ence was the way everyone talked about Charlie. For a start it didn't seem strange that Charlie wasn't there, but nobody really stuck the boot in or talked about him in a dis­missive way. We suppose this is their way of leaving the door open if he decides that, actually, this looks like it could be a bit of a laugh. (And it does look like it will be quite fun, in a way that straight­for­ward reunions often don't and in fact usually look like quite hard work.)

Anyway after all that there was a brief video which just showed the tourdates. 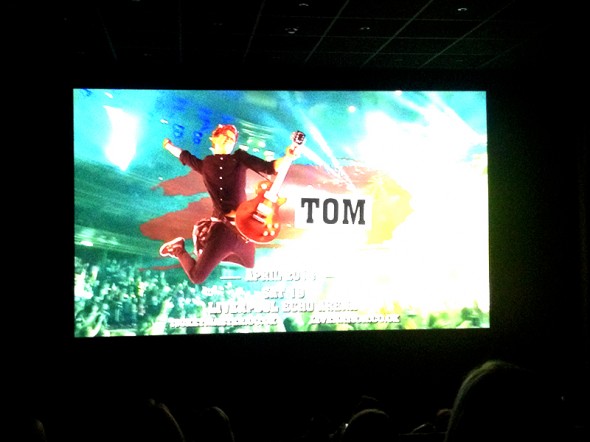 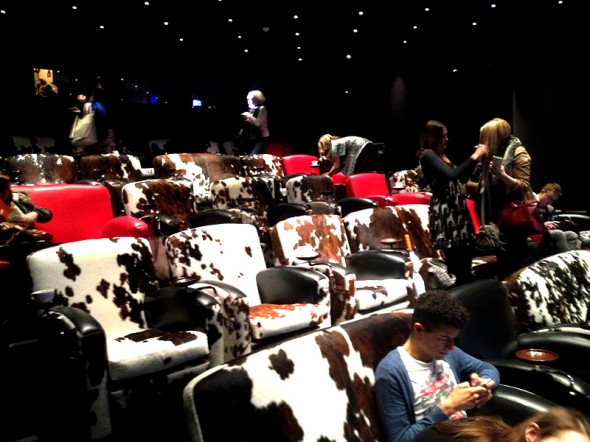 This is the exit. 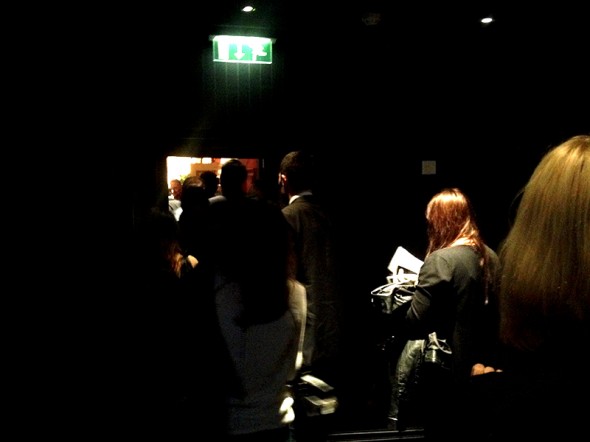 Outside the screening room there was a big cardboard photo of McBusted but it was too big to steal. 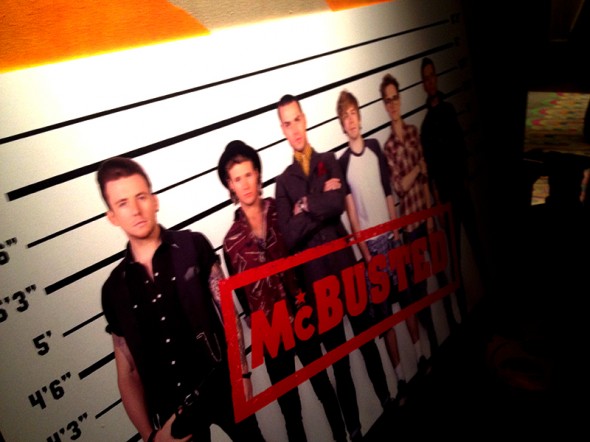 We were given press releases on clipboards. 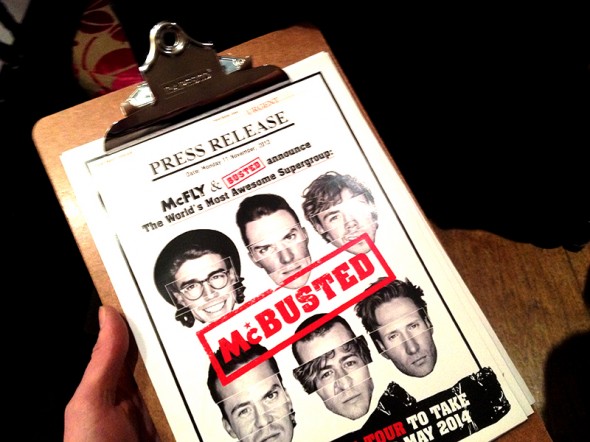 Seriously guys EVERYONE at the press con­fer­ence got their own clipboard. Imagine the budget! It was like the 1990s all over again.

(This said, imagine having to go down Rymans for that lot.) 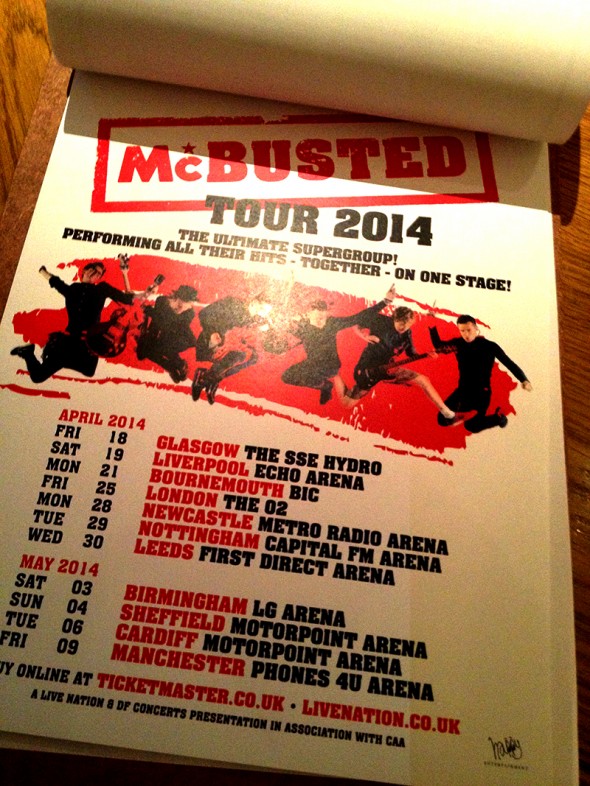 There was a photocall with McBusted standing in front of the 'height chart' thing. 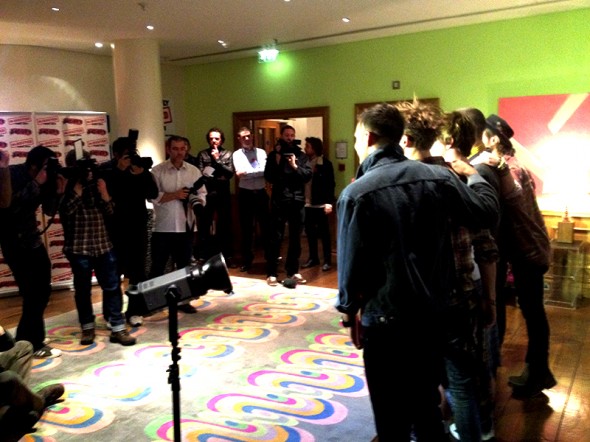 As you can see they were holding a large McBusted logo on a perspex back­ground. This, too, was too large to steal. 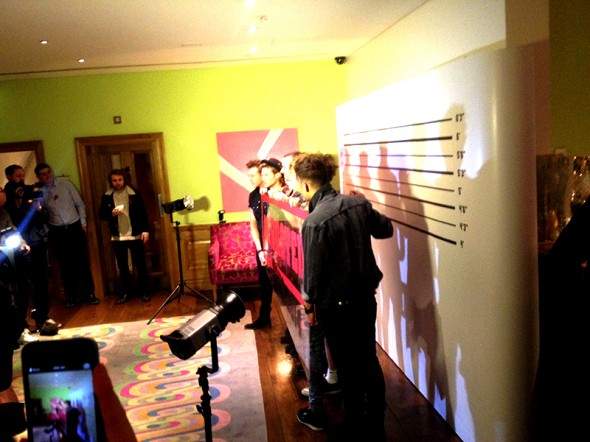 And after that everyone started drifting off. Loads of journ­al­ists got their pictures taken with McBusted.

And while all this was happening, the hotel staff somehow carried on as if pop history was not happening right in front of their eyes. 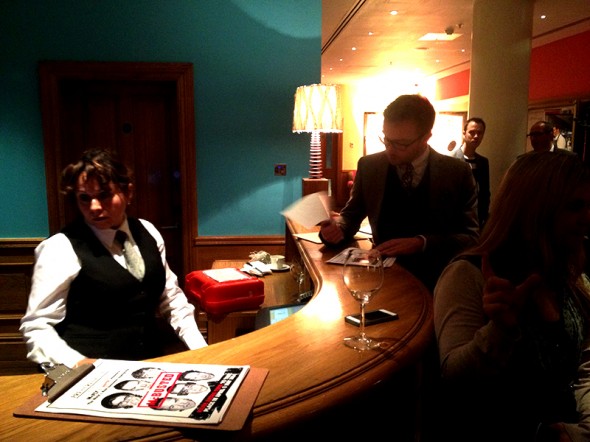 After everyone had pissed off we had a chat with McBusted and it was a bit strange because you want to grab them and go "OH CHRIST I HAVE MISSED YOU EVERY DAY AND EVERY NIGHT DON'T EVER LEAVE ME AGAIN" and then on the other hand you know that for the last few years four of the band's six members haven't gone anywhere and have, in fact, been pretty much every­where. So that's odd. And it's also odd that there's just a tour planned, without any apparent plan for an album, or a TV show or whatever. But maybe they're just stag­ger­ing their announce­ments, or gauging interest or something.

Either way it was an 8/10 sort of morning (and would have been a 9/10 if there had been sausages on the breakfast platter), and if you'd like to win the clipboard and press release just send an email to [email protected], tell us your favourite Busted memory, and we'll pick the best or funniest or somethingest one as the winner. Cheers! 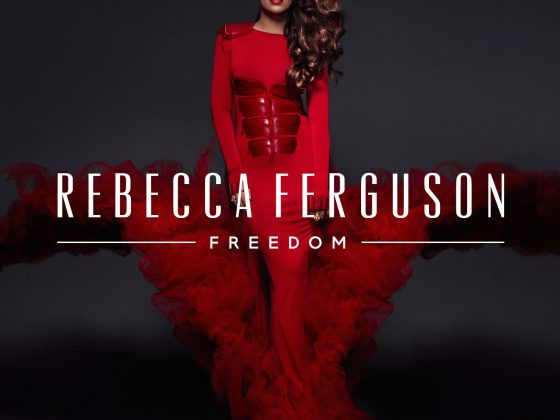 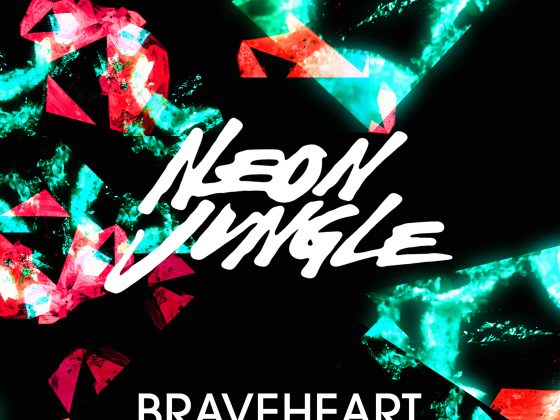