Hello! In theory you should only be seeing this if you're using a mobile or tablet. How's the site looking? If anything's wonky click here and tell us so we can fix it. Thanks! x
A new popstar came to the office last week to say hello to Dumper but, more import­antly, to say hello to you the Popjustice viewer. 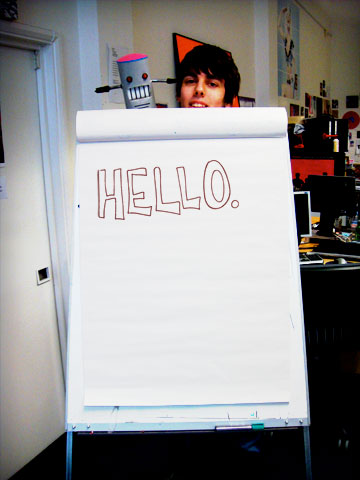 The new popstar's name is Luigi Masi, and you'll be able to catch him on tour with the Sugababes from tomorrow night. The 17-year-old, inde­pend­ently-signed singer takes over from Gabriella Cilmi, which is a shame because she really WHIPPED THE CROWD INTO A FRENZY at the Royal Albert Hall show.

It's usually very easy to make sense of what a new pop thing is and how it came to be, but when one of Luigi's tracks arrived in the office last year the whole 'package' seemed slightly confusing, not helped by the odd behaviour of two members of the Popjustice mes­sage­board, one of whom was clearly somehow involved in the project. As time went by and more big name producers and writers — none of them par­tic­u­larly cheap to get on board — were asso­ci­ated with Luigi things became even more confusing and by the time one of the biggest pro­duc­tion talents on the face of the planet was pur­portedly involved we decided it was time to confront Luigi. We had decided by this point that he was either a rampant fantasist or the figment of another rampant fantasist's imagination.

Anyway, he came to the office so he def­in­itely exists. During his visit last week we asked him some frank questions and he gave us some frank but still rather mys­ter­i­ous answers…

Popjustice: What if the money runs out?
Luigi: It won't.

…but refused to drink a cup of tea because he doesn't drink hot drinks (?!?!). Rude.

His first proper single is called 'The Look' and it's out later in the year; it's today's Song Of The Day so you can listen to it by clicking here.

Muffin good about this goodbye