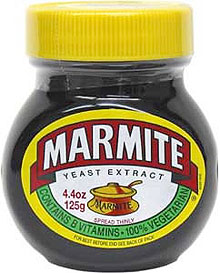 The word 'Marmite' has crept its way into the world of music over the last few years, par­tic­u­larly in the behind-the-scenes world of A&Rs, producers and managers. Simon Cowell used the phrase on X Factor over the weekend so we thought it was time to get to grips with the whole thing.

When used properly, the phrase describes the sort of band or artist which divides opinion as strongly as the disgusting/delicious yeasty food product Marmite. It is not a phrase used to describe how good or bad something is — there's no value judgement involved.

Popular acts who fall into the Marmite category include:

It has increas­ingly been used in the following sort of exchange:

Publicist: "Will you be writing about this new release from [insert generic band]? They've been getting some great airplay from Huw Stephens/Rob Da Bank/Annie Mac and they're on the NME stereo this week!!!"
Journalist: "I will not be covering this — it is awful."
Publicist: "Well they are a bit of a Marmite band!"

INCORRECT USE OF MARMITE. 'Marmite' is not a phrase to excuse the fact that some people do not like a band or their music.

Here is the news: some bands are just shit, and people who like them are wrong. Oh don't start boo-hooing about 'it's all a matter of taste'. This idea that everyone is 'allowed an opinion' is all very well but at the very heart of the matter is a simple fact that while people should be allow to enjoy whatever music they like, they should enjoy that musiuc knowing that they opinion is wrong. It's not 'horses for courses' or 'one man's meat is another man's poison'. Remember this, if nothing else: SOME MUSIC IS JUST SHIT.

The new Britney video: mental in a good way