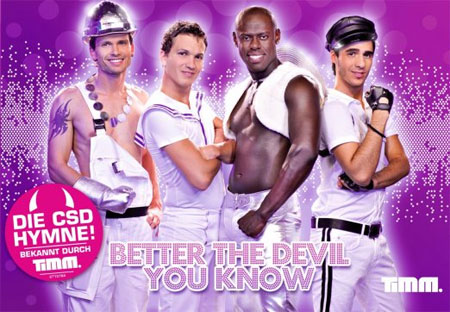 JLS may have put boybands back at the top of the charts in the UK but we might not yet be ready for all-German, all-gay boyband The Village Boys. Mainly because they appear to be Literally Quite Terrible.

As TAFKAP on the Popjustice forums sum­mar­ises: "German Gay-interest TV
channel "TIMM" was looking for a new Village People-type of openly Gay
boyband. They're signed with Universal and will release their debut
single, a cover of the Kylie/PWL classic, in August. This is the 2nd
attempt at a modern-day, openly homo­sexual boyband from Germany after
Marilyn's Boys flopped dis­astrously in 2002."

TAFKAP's post reminded us of a video link another reader sent over last week which didn't make much sense then but makes (a little bit) more sense now — it's from the auditions, and features a certainly-memorable version of Scissor Sisters' 'I Don't Feel Like Dancing'. Watch out for the bit where he starts chan­nel­ing La Roux…

The above-mentioned Marilyn's Boys, you may remember, were respons­ible for this version of 'Hot Stuff'.

Easy on the fake tan, lads…

Just a little run-around to go down the shops in