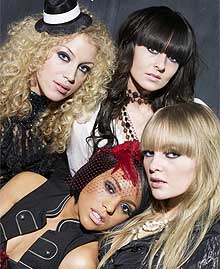 Sometimes you don't know whether to laugh, cry or retire from pop.

The lovely ladies in this picture are Citygirls. You've got to admire them for boasting a tiny-hatted Noddy Holder in their lineup but let's not judge on appear­ance alone. Here's what their MySpace tells us.

"City Girls – Sheena, Sian, Sophie and Rebecca after months in the studio are about to captivate all lovers of good dance music this summer."

Lovers of mediocre dance music can move along now. But if you love good dance music, prepare to be cap­tiv­ated. Take Justice off the stereo because Citygirls are here.

"Their debut single OMG is due for release at the end of July and with its cracking lyrics and sexy, energetic sound it’s sure to be a summer essential on the MP3 and in the clubs."

Rule Of Life: when someone says "sure to be" in this context, it can without exception be trans­lated as "sure not to be".

"Never again will you be able to text LOL, FAO or OMG without reminders of this edgy, electro pop beat."

You can see what the band were aiming for here. They were clearly looking for a clever way to claim ownership of a popular, everyday phrase. Something that is all around us. An almost sub­lim­inal trigger which would send people off to iTunes. It worked for 'Hot In Herre'. It worked for Hard Fi's first album sleeve. Why not 'OMG'? Here's why not: people use OMG instead of "oh my God" when they are a) lazy, b) short on time or c) stupid. This is not about the media's new habit of using 'OMG' at a safe, post-ironic distance. And let's face it, just because a phrase is popular it doesn't mean it is the good basis for a song. What next? 'I'm Going For A Shit Keep An Eye On My Drink'?

"With looks and legs to die for…"

We actually feel as if death has already claimed us. As if we are now in Hell. And all we can hear from now until the very end of time itself, drowning out the howls of a thousand tortured souls, is the 'edgy electro pop beat' of 'OMG'.

"…each City Girl brings something a little different to the party…"

Perhaps, but we know exactly what 'OMG' would bring to a 'party': three litres of White Lightning and an STD.

But wait. Maybe we're being hasty. It is, after all, All About The Music. Have a listen, then, to 'OMG' on the band's MySpace: www.myspace.com/citygirlsofficial.

COME BACK VANILLA, ALL IS FORGIVEN.

The greatest duet since 'Don't Go Breaking My Heart'