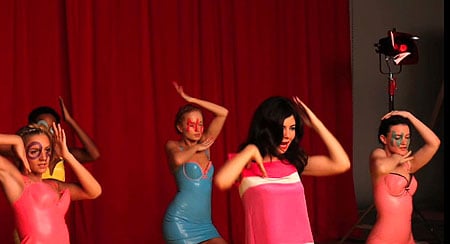 This footage from the Vogue website, in which Marina & The Diamonds shoots her new video (as covered the other day on Popjustice), makes the fact that Marina never joined The Saturdays even more annoying. As you can see:

a) She looks quite good as one of five ladies wearing colourful frocks.
b) She can do the 'Vogue' (the song not the website, try to keep up) / 'Alejandro' arm-wavey 'head in a box' dance routine, a routine not normally asso­ci­ated with The Saturdays but not to worry.
c) Er…

We once asked Marina if she thought the world would basically have been a better place if she'd joined The Saturdays. (The reason we asked her about it is that there was a period in her journey towards becoming Marina & The Diamonds when she was audi­tion­ing for bands and things.) She said no it would not have been better because she wouldn't have been able to express her serious 'n' important views about the would via the gift of song­writ­ing. We said well that is where you are wrong Marina because Una from The Saturdays has done some stuff involving an acoustic guitar on YouTube so it is therefore possible to be Highly Talented and still be in The Saturdays. Marina was not very convinced by this argument.

Us: What is your favourite Saturdays song?
Marina: 'Up'.

Is the right answer.

Pop music that's not up to much. This week: Preeya