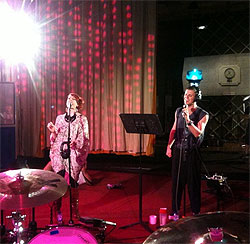 When we spoke to Stuart Price about the Kylie album back in April, he said (perhaps not entirely seriousy) that during the recording sessions Kylie would sometimes slip into a Dolly Parton vocal. Eventually (Stuart said) every song con­sidered for the album was required to pass a 'Dolly Parton test': if a song sounded good in the style of DP, it went on the album.

Well, 'All The Lovers' got the full Dolly treatment from Scissor Sisters in the Radio 1 Live Lounge yesterday.

The version has divided Kylie fans but con­sid­er­ing Kylie fans haven't
been able to agree on anything since she was uncon­vin­cingly fixing cars in the late 80s a mixed reponse is the best you can hope for.

So what happened was,  the song started on the radio, and we said this. 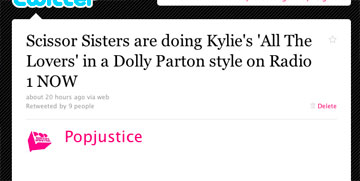 Then Kylie said this. 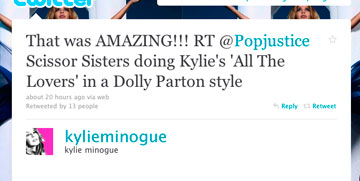 Then Dannii said THIS. 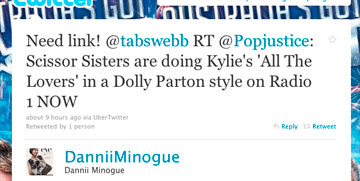 This means we were retweeted by TWO MINOGUES in less than 24 hours. *Runs around room high-fiving strangers, trips over someone's bag, hits head on doorframe, goes to A&E*

While Annie Mac was standing in yesterday that slot on Radio 1 is usually the domain of Fearne 'Yeah Music Amazing' Cotton and we appre­ci­ate that many of you will — like Dannii — have therefore missed the per­form­ance. So here it is.

A quite odd Hoosiers video

Let's be honest, perhaps the world would be better if Marina had joined The Saturdays