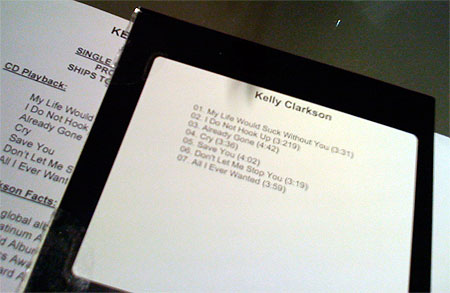 We went to listen to some of the Kelly Clarkson album yesterday, and after­wards had a chat with her about this and that. She was wearing new jeans and all the blue dye was coming off on her hands. We would imagine that when she took the jeans off last night she also had blue legs. We asked her if the songs we'd listened to were the only good ones on the album and if the other ones were rubbish but she said the others simply hadn't been mixed yet* and that one of them was amazing and sounded like Eurythmics-meets-Garbage.

* Making a guitar sound a little quieter really does make all the dif­fer­ence between a tune being good or not, after all

The new Pet Shop Boys album: it's quite good