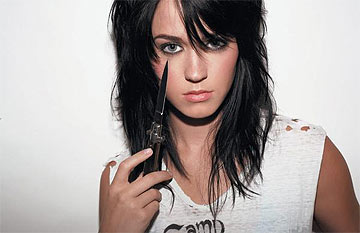 …which is the song in question, recorded with Dr Luke (amazing) and Max Martin (double amazing). The song is literally quite good and Katy Perry, a 23-year-old LA resident, is obviously fit. This is all good news.

The bad news is that the first you might hear (or already have heard) of Katy's 'output' is a song called 'Ur So Gay', which is about her ex boyfriend being useless because he's a bit like a fairly narrow idea of what gay men are like (or someting). It's basically the kind of song enjoyed by Radio One breakfast DJs and gay men who don't think with their brains — Out magazine did a good interview with Katy about it here. It turns out that Katy is a 'friend of Mika'!!!

We ran the song past some people a few weeks ago and here is what they said.

"It's fucking abysmal."
"It's just won the 'worst song I've heard this year so far' award."
"What a sack of shit."
"I lasted a minute."
"Having seen her picture, I R now soGAy :("
"After the recent finding against Chris Moyles for calling something 'GAY' on his show none of the com­mer­cial radio stations will play that here."
"It is pony, espe­cially the whistling."

You can listen to 'Ur So Gay' at Katy's MySpace page along with some of her other bits and bobs; that track aside her other tracks are pretty listen­able and having taken the US media 'by storm' (hem hem) she's worth keeping an eye on over here, too.

The future of music: muffin aftermath