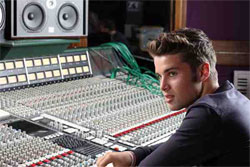 1. Joe McElderry (pictured looking 'musical', right)
It would be useful at this point to be able to say 'well the reason Joe is at Number One on the Popjustice Almighty is that we have now heard his music and it is very good', but we haven't heard it yet which means that the only real reason for Joe being Number One is that he is an amazing popstar. He's in a slightly odd position right now — on one hand it should be obvious to anyone with a brain (and anyone who doesn't treat pop fandom as a blood­s­port) that Joe doesn't deserve to be mocked because someone else got a Number One instead of him last Christmas, and it should be fairly easy to com­pre­hend that Joe doesn't deserve to be laughed at or ridiculed for coming out as gay. Those are the easy bits (although some people do seem to be having trouble with them). The com­plic­ated part is that while he shouldn't be treated like shit, nor does Joe deserve to be pat­ron­ised, wrapped in cotton wool or treated like a child. In a nutshell, everyone just needs to stop attacking him and stop defending him and maybe, somehow, without people shouting over the top of him he might be able to get on with the day job, ie being a popstar.
More Joe

2. Hurts
The album is all kinds of incredible.
More Hurts

3. Jessie J
500 years in the making, the solo career of 'Party In The USA' (and some other stuff) song­writer Jessie J is finally underway.
More Jessie J

4. Ed Drewett
The voice of Professor Green's 'Need You Tonight' and the writer behind The Wanted's 'All Time Low', Ed's on the verge of something quite exciting with forth­com­ing single 'Champagne Lemonade'.
More Ed Drewett

5. Robyn
By the end of the 'Body Talk' blowout Robyn won't really have issued many more tracks than most other artists do during the run of a normal bonus-tracks-'n'-b-sides album campaign, but it's not just what Robyn does that is amazing, it's the way she does it. 'Indestructible' , which appears in acoustic form on 'Body Talk PT 2' and is due to turn up in a slightly different form on 'Body Talk PT 3', is already an anthem.
More Robyn

666. 'Travie McCoy'
You'll have to excuse our language here viewers but all the clues are pointing to 'Billionaire' being a song for bellends, by a bellend.
More 'Travie McCoy'

The top bit of a photograph featuring Sean from Same Difference