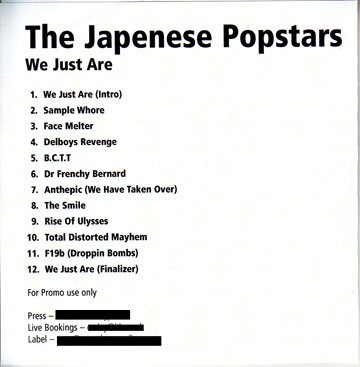 This album is fucking amazing. Exhibits A, B, C, D and E:

In fact it is in severe danger of taking over our lives, but for one 'friend of Popjustice' it is already too late. To days ago, in an email whose subject line read 'Japanese Popstars', our cor­res­pond­ent asked:

"Have you heard the above? It's literally quite good."

No, we replied. Should we give it a spin?

"Yes — and turn it up (room "odorisers" optional)"

We noted in our response that the album, true to our friend's pre­dic­tion, was indeed literally quite good.

"Could do with some vocals — but the "tunes" are quite nice.
Shame they can't spell JAPANESE.
But — yes, it's LITERALLY GOOD!
Yours, Dr Frenchy Bernard"

A few hours passed and then, when we were trying to get on with some work… Ping!

"What about PACIFIC! Tracks 3 and 6 are LITERALLY ALL RIGHT."

"God it's good this album"

Half nine in the morning. This cor­res­pond­ence was from a man whose fleeting dalliance with the Japanese Popstars album had somehow trapped him in a sort of endless rave hell. "We're listening to the '70s Dinner Party' album," we replied. Our chum was unimpressed.

Which is most of the songs on 'We Just Are'. Anyway the band's MySpace is here and the v good album's out at the end of next month.

The 'About You Now' covers continue to roll in…