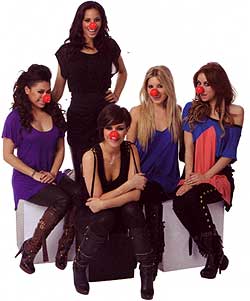 Is there anything worse than people having fun? It's bad enough in real life, with people in 'fancy dress' laughing and getting in your way, but it's even worse when fun inter­feres with pop music. Real life and pop music coincide every couple of years for Comic Relief, the worst example of people having fun and an oppor­tun­ity for adults to behave like imbeciles.

2. Some kid gives up their £1.50 pocket money and everyone goes mental about how brilliant it is. It's not brilliant, £1.50 is fuck all. What's Lenny Henry going to do with £1.50? Probably buy a couple of tapes to record yet another tedious thing for Radio 4 about his rubbish effort in Othello.

3. 'Authority figures' eg The Police show that they have a human side by sporting eg antlers on their helmets and everyone goes "oh well done The Police, as long as you have a 'human side' it doesn't matter that you never solve any burg­lar­ies, are never around when women are being hit round the head with iron bars in carparks etc etc".

Pop music has never fared well at the hands of Comic Relief. When it's not 'original numbers' like Right Said Fred's 'Stick It Out' it's odd cover versions and even if the song's half decent the videos are polluted by amusing 'bloopers' and randomly inserted models being 'wacky'. 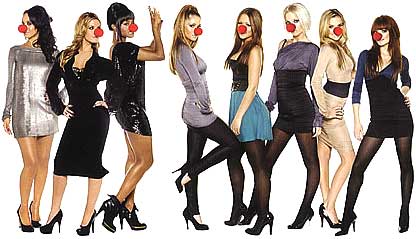 Nice of you all to make the effort to turn up on the same day, cheers girls.

Anyway The Saturdays' 'Just Can't Get Enough' is out today [iTunes link]. We played a bit of it to Depeche Mode's Dave 'Dave' Gahan a few weeks ago — we won't print his  response here but he did note that Comic Relief is a good charity. Sometimes when we hear the Saturdays single it sounds amazing, and sometimes when we hear it it sounds awful. This is one of the better performances:

Either way it sounds like a 21st Century mas­ter­piece next to the other Comic Relief single 'Islands In The Stream', a release which inex­plic­ably (and perhaps rather impress­ively) takes the form of a comedic musical release devoid of both comedy and music. The intro is quite funny though.

What have we learned from all this? Nothing. Literally nothing. It's all been totally pointless.

Here's Hale & Pace's Comic Relief song 'The Stonk' with a donk on it.

Royksopp feat Robyn — 'The Girl And The Robot'