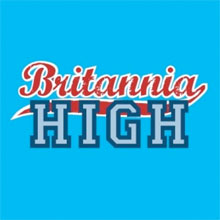 The Britannia High album isn'r half bad. In fact, to move away from fractions and into per­cent­ages, it is precisely 58% bad. Mostly bad, you could say, although this also means that almost half of it is good.

To use an analogy which makes more sense in our heads than it will written down, what we basically have here is an 18 track saucepan full of chicken heads and uniden­ti­fied liquids which, with a bit of 'reducing down', could have ended up being a nice tasty 10 track soup.

It's hard to imagine how this lack of focus has happened, con­sid­er­ing how few song­writers were involved with these songs. We mean, they've only roped in…

You've got to admit, that's a pretty impress­ive selection of (mostly) British song­writ­ing talent, although you also have to remember that most of them, like a lot of other pop song­writers, have spent the last eight years living off the royalties from b‑sides to 2001 Top 75 chart non-smashes so when someone comes along and says, "hello, we are putting together a seemingly endless album full of pop stuff, have you got any spare songs knocking around?" the phonecall is probably cut short when the song­writer goes to their demo cupboard, opens it, and is crushed under the weight of eight million unre­cor­ded songs ava­lanch­ing onto their head.

Among our favourite songs on the album — and it's not all quite as jazz hands as the chronic TV show suggests — are 'Weight Of The World', 'Without You', and 'Do It All Over Again'. (Bizarrely, the album seems to have almost been sequenced in reverse with most of the best songs in the later stages.) We also like the 'Changing Man' chorus…

…which means that 'Changing Man' is today's Song Of The Day. Anyway the album's going for £7.99 on Amazon

What do you call a dwarf on the Paris underground? A metrognome.